If you're looking for an all-in-one portable bluetooth speaker, Tronsmart Element T6 Plus offers just about everything you'd ever want. This means you can expect bluetooth 5.0 support, true-wireless stereo, IPX6 water-resistance, type-C charging, external power bank functionality, EQ tuned audio quality, max 40W music output, and one key to activate the voice assistant on your phone (Google Assistant and Siri). This is why we are excited to announce that AP has partnered with Tronsmart to give away 10 Element T6 Plus portable bluetooth speakers, and if you'd like to pick one up today, there's a 15% coupon code available to all AP readers.

What a day! I get home and find a package from @AndroidPolice with the @Tronsmart bluetooth speaker I won on their contest! Time to #dance! Thanks a lot! Loving it!! pic.twitter.com/nt5XwZb0rD

Again, Thanks to the great people @tronsmart and @androidpolice for the great T6 Plus Bluetooth speaker! I've been playing with it for a week now and can't get over how much this gets right over any other speaker I've seen. First..USB-C! Now my phones, earbuds and speaker is the same cable. And you won't have to charge it often with over 6000ma battery inside. I've run it for hours and still over 80% battery. And if my phone needs a charge, I can charge it from the speaker! The buttons and inputs are easy and convenient. The lighted dial in the top is a volume knob and pause button. The side buttons for power, skip, source and EQ are easy to find and rugged. One of my favorite features are all the inputs: Bluetooth, a Hero Port, USB and MicroSD. Bluetooth pairing was easy, and I put MP3s on both a USB thumb drive and MicroSD card. All connected and played easily. I'm going to put all my Christmas music on my MicroSD card and have a stand alone music box! But, of course, it's a speaker. I really can't photograph the sounds quality, but you'll have to take my word that it sounds clear and rich. By itself it sounds as good as a decent room stereo, with good deep bass. You can crank it to Max without distortion - louder than you'll ever want to indoors. And it's ruggedized so you can take it outside as a great park/picnic accessory. What could be improved? Honestly, I can't think of anything. I suppose some might say it's a little big compared to other Bluetooth speakers, but every smaller one I've used doesn't sound this rich, deep or distortion free. It's not large by any means, and it is very portable. I put a DVD next to the speaker in one of the photos for scale.

Tronsmart's Element T6 Plus portable bluetooth speaker features a classical design with a rotating control wheel that suits its portable cylinder shape. Not only does it look great, but it's also incredibly easy to use. 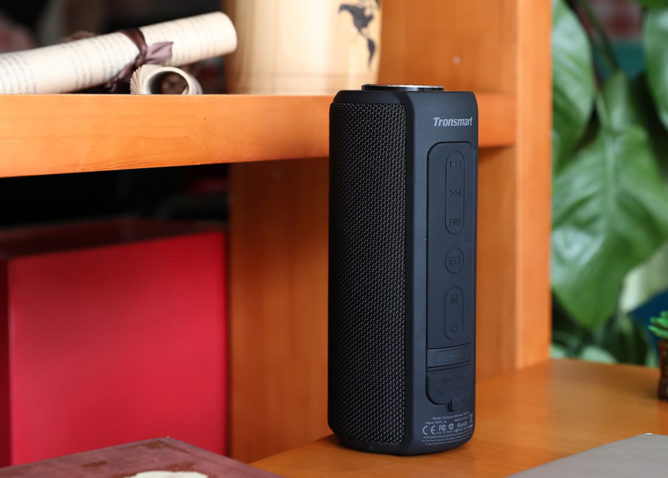 Thanks to the speaker's support for voice assistants, you can always command your smart device by voice as long as it's paired with the T6. Responses will come from the speaker, and you can even use the T6 Plus as an external speaker for your Alexa-enabled device.

Of course, bluetooth 5.0 is supported for fast wireless connectivity that provides a large and stable range. But that's not all, the included TWS (true wireless stereo) technology allows you to pair two T6 Plus Speakers together for stereo support, plus it offers the possibility to create a louder experience. 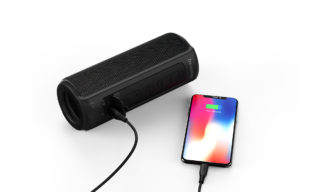 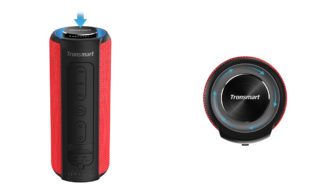 Best of all, the device is IPX6 water-resistant, which means it can be brought to the beach or pool without any worries. So if you've been looking for a portable bluetooth speaker that contains a built-in 6600mah Li-ion battery pack that won't be ruined when it gets wet, the Tronsmart T6 Plus is the perfect device for just about any outing you can think of. 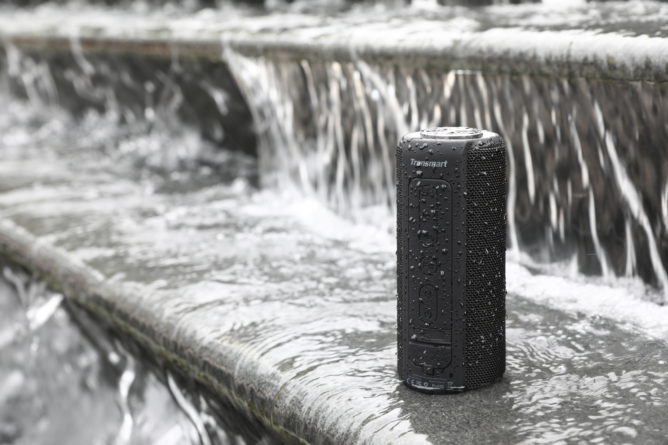 This giveaway will run from Tuesday, August 27th to 11:59pm PT on Thursday, August 29th. Ten winners will be selected, and each will receive one Tronsmart Element T6 Plus portable bluetooth speaker. Only continental United States residents may enter. Good luck everyone!