Miracles do happen, folks. Over the past couple of weeks, we've seen Google Maps, then Drive and Contacts add that nifty account switching gesture, and all we've wanted was for it to make its way to Gmail. That's where most of us often move between inboxes and accounts, many times a day. However, at the pace the Gmail team likes to implement change (cf. dark mode), we were thinking it might take months for the feature to trickle down to the app. But lo-and-behold, it's now there.

Gmail version 2019.08.18 is the one you need to get that sweet swipin'. Like the previous iterations, you simply swipe up or down on your avatar in the top right and that triggers the account switch. You can still tap it to open up the full account picker interface, but the gesture is faster if you want to quickly move between your inboxes.

The animation is the same one as Contacts: static interface elements remain there, but your image and emails fade out then in. However, unlike Contacts, there's no option for all inboxes, so you'll still have to get to that one manually from the side menu.

Those of you who have iOS devices might have noticed that the gesture first appeared there in Gmail, many months ago, so even though it's sad to see Android trailing behind, we have the solace of not waiting until 2020 to get it.

Gmail v2019.08.18 is slowly rolling out to users on the Play Store, but we're nicer than Google so we won't make you wait to get it. It's already available on APK Mirror.

This release also contains the first signs of dark mode in Gmail. Both the app's widget and the splash screen have a dark variation to suit the system-wide theme on Android Q (though you may need to force close and clear cache before seeing them). And in case you're wondering, it's the same dark grey blue as Google Pay (#202124). Thanks Rudresh and Henny Roggy! 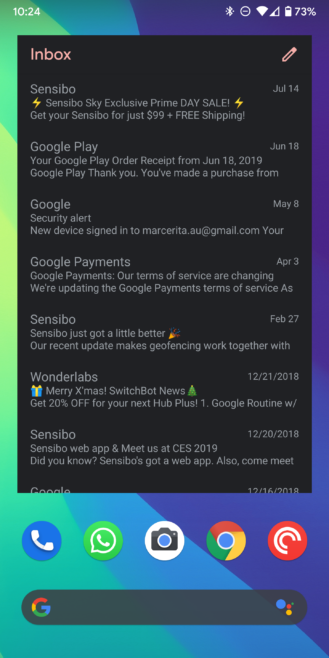 [Update: Three-finger slide] Chrome OS will get a touchpad gesture to move between virtual desktops