The smart speaker market is still exploding in size, but the roles seemed to be clearly defined. With Google's stellar results last year, we could be lead to believe that the company was on track to become number one, even overtaking Amazon for all of 2019. Instead, lacking new devices, Google's shipments declined by 19.8% year-over-year. It has been fallen to the third place after surprise competitor Baidu grew by a whopping 3700% YoY – yes, the decimals are set correctly here.

Baidu, Google's Chinese search engine competitor, only entered the market last year. In hindsight, it was clear that the company was poised to grow fast – after all, it managed to secure the fifth place from the get-go in 2018. Baidu upped its market share from a mere 0.7% in Q2 2018 to 17.3% this year. In contrast, Google's slice shrunk considerably, down to 16.7% from the 32.3% it previously bore. In fact, all other vendors registered growth YoY, with Amazon cementing its first place with a market share of 25.4%. 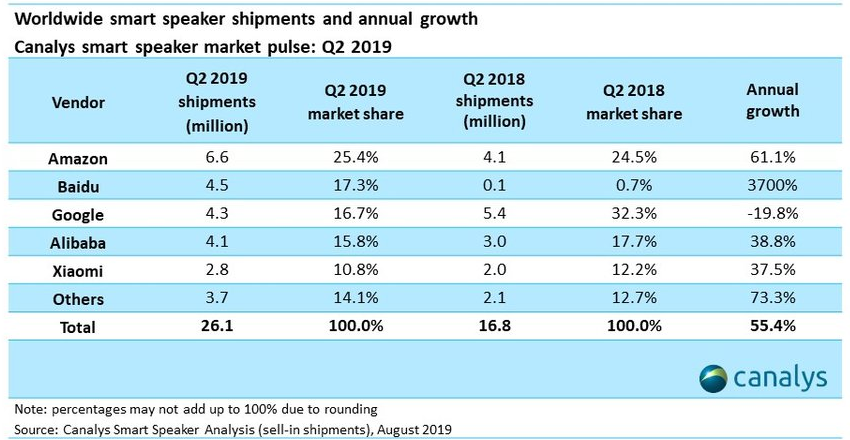 We have to keep in mind that Baidu and Google operate in different countries altogether, so it's a stretch to say that Google is threatened by the Chinese search engine's entrée to the smart speaker market. Still, it's interesting to see so much movement in such a short amount of time, especially since we're getting used to slow changes in the smartphone market. More than anything, these results show that Google is overdue to release new regular Home speakers after focusing on smart displays lately.

Unread badges could be coming to Google Chrome tabs and bookmarks