While cloud storage may be all the rage these days, local storage is only getting cheaper and more abundant. Case in point: SanDisk's A2-rated 512GB Extreme microSD card is just $129.99 on Amazon right now, its lowest price ever. That's a lot of storage for such a small card.

Oftentimes with cheap microSD cards, you're forced to sacrifice performance for capacity. That's not the case here — the A2 rating means that it has a minimum random read speed of 4000 IOPS, a minimum random write of 2000 IOPS, and a minimum sustained sequential write of 10MB/s. This card also supports read and write speeds of up to 160MB/s and 90MB/s, respectively. Long story short, this is pretty much the best microSD card you can buy. Combine it with something like a 512GB Galaxy Note10, and you could have a whopping 1TB of local storage — on your phone. 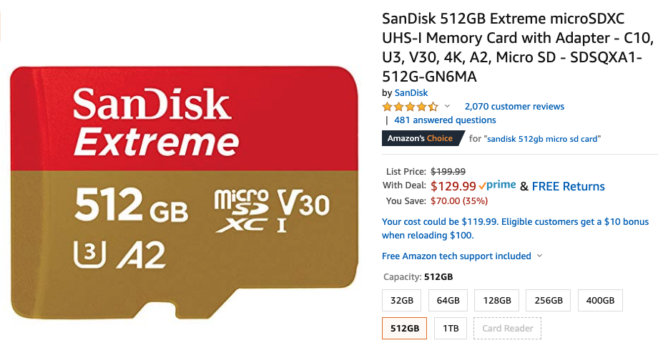 $129.99 is the lowest price we've seen for this card, beating out previous deals at $135 and $140. Plus, you get free shipping, returns, and tech support with Amazon. If you'd prefer to order from Newegg for whatever reason, it's the same price there. If you're interested, don't snooze — these will probably go quickly. Grab a third-gen August Smart Lock for $77, its lowest price ever