Earlier this week, we learned that Microsoft would bring its Funko-Pop-themed Gears of War spinoff to Android on August 22nd. Now that Gears POP is here, it's quite clear that this strategy game was designed to play very similarly to Clash Royale. The setup is almost exactly the same. You'll work your way up the field by sending out an assortment of troops to take down your opponent's turrets and base. It's a standard free-to-play real-time multiplayer title with a Funko-Pop Gears of War skin, and yes, it's packed with in-app purchases, multiple currencies, wait timers, and loot boxes.

I've spent some time with Gears POP this morning to get a feel for its gameplay. If you watch the trailer above, you'll see that the title is laid out almost exactly the same as Clash Royale, but there's one tiny difference. Since this is a Gears of War title, cover mechanics play a role in how you work your way up the field. On the left and right of the board, there are at least three areas that provide cover. You'll have to send out specific troops that can claim this cover, and whichever player controls the majority of these points will have a better chance at getting close to their opponent's turrets and base. The setup works well and is rather intuitive, but of course, this game is a clone, so it's not like Microsoft is breaking a lot of new ground here.

Gears POP is a free-to-play release, which means it's monetized aggressively. In-app purchases are indeed included, and they range up to $99.99 per item. You can also expect multiple in-game currencies, and each one can be purchased in the cash shop. There are also loot boxes in the mix that have wait timers attached (that can take 2 hours or more to count down), but it gets worse than this since you can only hold four crates at a time, which means there's no incentive to play as their timers count down. Now I'm no game designer, but when a developer purposefully discourages people from playing their game, I'm often more than happy to oblige. 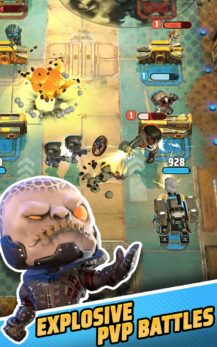 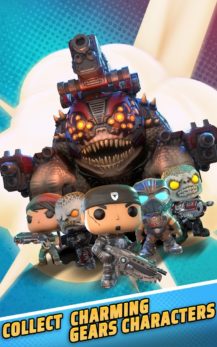 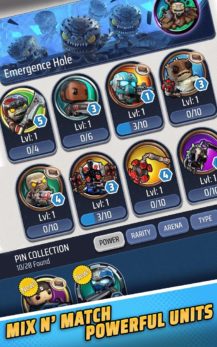 There's no doubt that Gears POP was designed for casual play in short bursts, and I have to say the addition of cover mechanics adds something a little extra to the familiar real-time multiplayer gameplay. It would appear that the title is off to a good start if you're a fan of Clash Royale clones. I didn't run into many uneven matches, and despite the egregious monetization, the store and UI are laid out clearly, so you won't have to deal with the maze of menus often found in similar products. While I do not doubt that those who spend a lot of money on the title will have an easier time ranking up, I suppose it's par for the course at this point. So if you don't mind this kind of free-to-play design, you'll probably enjoy Gears POP.