If you're on the lookout for an interesting mid-range device that won't break the bank, the Moto Z3 is definitely worth considering. It features respectable internals, but its release price was too steep for it to thrill on such a competitive market. Nevertheless, now that the handset is down to just $200, it offers excellent value for money.

The Z3 Play features a Snapdragon 636 SoC, a 6-inch 2160 x 1080 OLED display, 4GB of RAM, 32 GB of storage, and a 3,000mAh battery. The last two can be increased thanks to the microSD card slot and the additional Mod battery. Similarly, you can use other Moto Mods to expand the Z3 Play's features, such as a gamepad or a 360 camera. The handset also has two rear cameras, with a 12MP main shooter and a 5MP depth-sensing camera setup, as well as an 8MP selfie sensor on the front.

In our review, we liked the phone's display, mods, and unaltered Android experience. However, we found its price to be unacceptable and found the way the battery mod worked could be improved. Thankfully, this offer saves you $150 on the regular price, which makes it a much sweeter deal. However, this particular version doesn't come with the battery Mod, so keep that in mind if you needed the extra juice.

The device is sold unlocked and comes with a US warranty. It's compatible with most US carriers, including AT&T, T-Mobile, Verizon, and Sprint.

Motorola has also dropped the price of the Z3 Play to $200 on its site, and is throwing in a free stereo speaker, gamepad, or True Zoom mod for free with the purchase. Simply add the phone and one of the three mods to your cart to enjoy the discount. I would have recommended the True Zoom mod as it's the most expensive (and probably most useful) of the three, but it's out of stock for now. Sadly, the battery mod isn't part of the offer, as it would have been my go-to option. 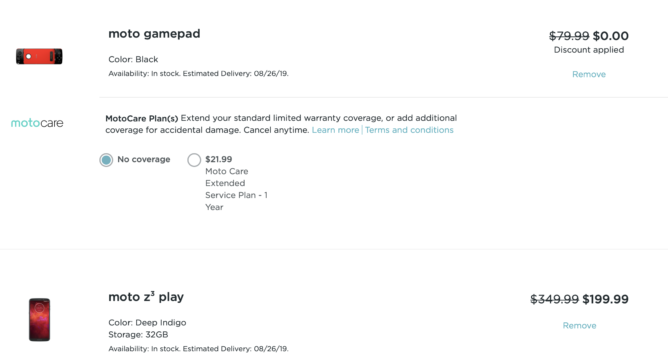 [Update: Winners] Win one of 12 truly wireless EarFun Free earbuds, or get them 15% off [Worldwide]