Due to the busy nature of any trade fair, Google was forced to use ethernet for the demo. Instead of connecting the Stadia controller to a router via Wi-Fi, the gamepad was hard-wired to a corresponding Pixelbook or Pixel 3 XL, linked to Stadia servers. Potentially, connecting the controller to the router directly should lead to even less latency since commands don’t have to travel through yet another node before reaching Google’s servers. This is Google's preferred setup for usage at home, so it's a bummer we couldn't test it today. 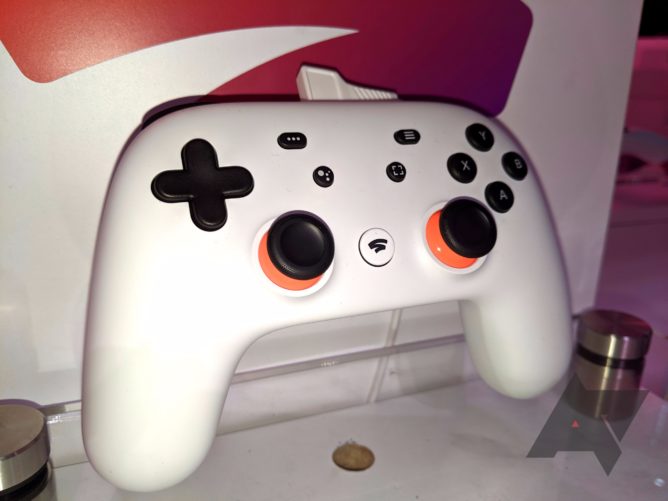 The Stadia controller, in contrast to PlayStation’s and Xbox’s solution, looks considerably Google-y, lacking a better word. Just like the Pixel phones, its dual sticks are accompanied by unintrusive orange and yellow accent colors, and the white plastic matches the Pixel 3a and Home devices. You could criticize it for looking rather toyish, but this is a game controller after all.

The button layout is similar to the competiton. The clickable dual sticks are joined by two pairs of shoulder buttons, a d-pad, and four action buttons. In the middle, you get another set of options for invoking Google Assistant, screen recording (both not working yet), opening the Stadia menu, or pausing the game. Holding the controller in my hands, it doesn’t feel as sturdy as the PS4 counterpart, and while buttons have a distinct click, they still feel mushy before you completely press down. Overall, the controller is decent enough and if Google would've priced it just a bit more competitive, it would be well worth its money – especially for a first-gen product.

In Gamescom’s hands-on area, Stadia was available on a Pixel 3 XL and a Pixelbook, both in conjunction with the controller. The Pixelbook was connected to an external 1080p screen, and the Pixel phone didn’t offer Stadia’s maximum 4K resolution, either. 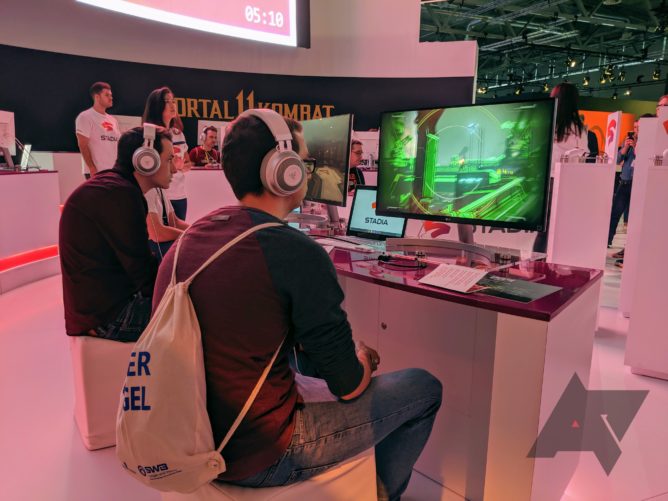 Google’s choice of demo games shows that it’s confident in Stadia’s low latency. I could test Doom Eternal and Mortal Kombat 11, both examples of genres that require fast reactions where milliseconds can make or break your winning streak. When I played, I didn't notice any perceivable lag at all (though note I’m a casual gamer at most). I did see blurriness around letters, with artifacts increasing or decreasing depending on how heavy the rendered scene is.

It's understandable – even though Stadia requires a 20 MBit/s connection to go 1080p, live footage still has to be heavily compressed. Generally this wasn’t a nuisance by any means, but still noticeable. I also had two instances of frozen frames that remained static for about a jarring second, but I’d be careful calling out Google for it at this point in time – there was a multitude of devices streaming from Stadia at the same location, which probably won't happen in real-world usage.

Google employees told me that the servers used during the demos are stationed in Frankfurt, located about 100 miles away from Gamescom. They wouldn’t tell me how fast their connection at the trade fair was, though – the only thing they would reveal is that it wasn’t extraordinarily fast and that you could reasonably expect a similar connection at home.

With all this in mind, I still fear that Wi-Fi could be Stadia’s Achilles heel. So far, we’ve only ever got to use Stadia in an environment completely controlled by Google, either wired or at least shielded from other networks. The reality is that Wi-Fi networks interfere with each other. Stadia might drop more frames once it reaches your home with its potentially less-than-ideal networking infrastructure. Still, the Gamescom demo is promising to say the least and has me excited for the November launch.

I spoke to some of the other trade visitors who were equally impressed with the capabilities of the game streaming service. They all agreed that there wasn’t visible lag, though they also admitted that they weren’t the heaviest gamers and none of them played Doom Eternal or Mortal Kombat before.

If you’re a competitive gamer or even just very advanced, Stadia probably isn’t for you. But that’s the beauty of open markets. There’s a good service for everyone, and people heavily invested in gaming can still heavily invest in hardware. For others, purchasing a game with no additional hardware required might be the better deal, even if that means they’ll see some artifacts, some lag, and some frozen frames.

MyNBA2K20 companion app just arrived on the Play Store, and it's packed with in-app purchases