Google purchased smart home accessory-maker Nest back in 2014. It announced tighter integration of the brand into its hardware division at Google I/O this year, including the rebranding of the Google Home Hub as Google Nest Hub and the announcement of the new, larger Nest Hub Max. That newfound closeness is coming at a cost, though: Nest accounts are migrating to Google accounts, and the company is retiring the Works with Nest API, consequently breaking direct IFTTT integration with Nest products.

Before transferring Nest data to a Google account, users will have to remove all existing Works with Nest connections — which will render any IFTTT recipes that involve Nest devices inoperable. Nest will retain Google Assistant integration, though, so Assistant routines that include actions like adjusting Nest thermostats will still be possible. According to Nest's FAQ about the transition, preventing third parties from requesting direct access to Nest devices helps keep user data more private. 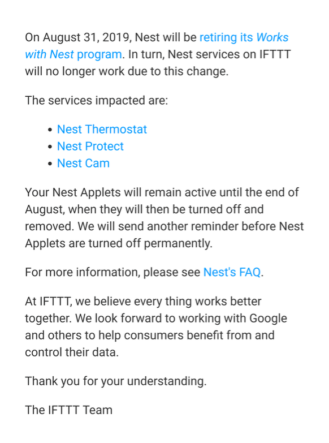 IFTTT's email about Works with Nest.

There's no announced deadline by which Nest users have to migrate to Google accounts, but Works with Nest integrations will only continue to function until August 31 at the latest. Nest notes that some partners may end support earlier, however.

Google started allowing Nest users to migrate their accounts and subscriptions to Google and its own Store. Following that, IFTTT immediately issued a warning to its existing users telling them that they should not migrate if they want their Nest applets and automations to keep working. If they do, there's no workaround that will bring the functionality back. Also, even if they don't migrate to a Google account, users shouldn't disconnect the Nest service from IFTTT as they won't be able to reconnect it again.