Adding a soundbar is one of the quickest, easiest, and potentially most impressive upgrades you can make to your television, supercharging your entertainment experience with rich, room-filling sound. And while there's no shortage of options out there, supporting tons of extra audio channels or external subwoofers, we’re only now starting to see really smart, connected solutions emerge.

The JBL Link Bar is just such a marriage, wedding Android TV smarts with a 100W soundbar. So instead of just upgrading your TV to sound a whole lot better, it offers a shot in the arm for aging legacy sets that lack built-in streaming or smart-home features of their own. The concept makes a lot of sense — does JBL's execution hold up? Well, yes and no.

Soundbars are born of simplicity (wiring up a discrete 5.1 system is so last decade), so it shouldn’t be any surprise that getting started with the Link Bar is as straightforward as could be possibly be: pop it out of the box, plug in the included power and HDMI cables, and you’re nearly there. 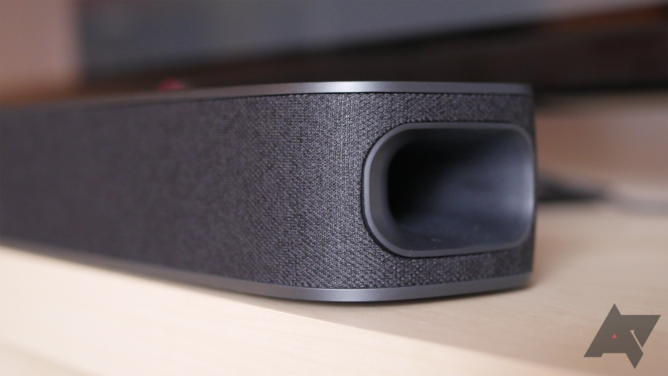 The Bar comes with a Bluetooth, microphone-equipped remote (batteries included) as well as a basic mounting kit, if you’d prefer to hang the Link Bar on the wall under your TV rather than placing it on a flat surface. You get a paper template showing where to hang two small brackets, then the Link Bar just slides into place. 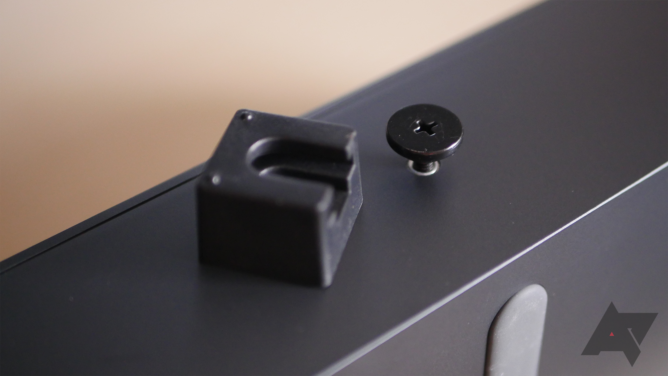 Software on-boarding isn’t much different from setting up any other Android device: hop on a network, enter your account credentials, choose a few apps to install, and that’s just about it. So far, so good.

The Link Bar is essentially four products in one: it’s a soundbar, obviously, as well as an Android TV box, but also a Bluetooth speaker and a Home-like Assistant speaker.

Bluetooth functionality gets not just a dedicated remote button, but also one on the Link Bar itself. Those make it very convenient to access this mode even with your TV off (just keep in mind that you’ll need to confirm your device on-screen for initial pairing). Sound quality is pretty good; it lacks some bass clarity but otherwise satisfies. 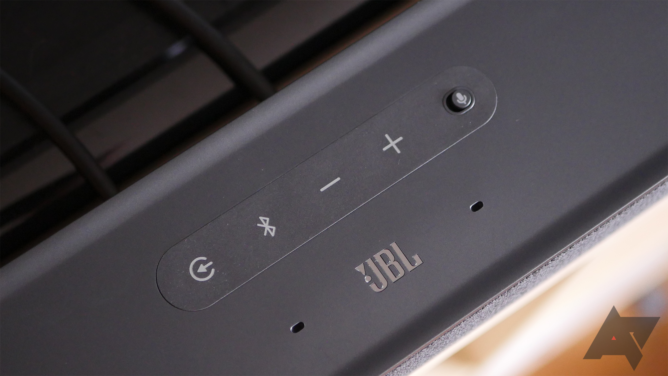 Controls up top make the Link Bar easy to use as a Bluetooth speaker.

As an Assistant speaker, the Link Bar is always listening for its hotword with its far-field microphones, even when your TV is off. When you need privacy, a physical switch atop the soundbar disables them.

In this mode, Assistant works pretty well. That situation isn’t always so true when using it while your TV’s on and you’re streaming something; while at times this works fine, it’s often incredibly slow, taking several times longer than using Assistant on your phone. I hope JBL can fix this with an update, because right now it’s just painful. 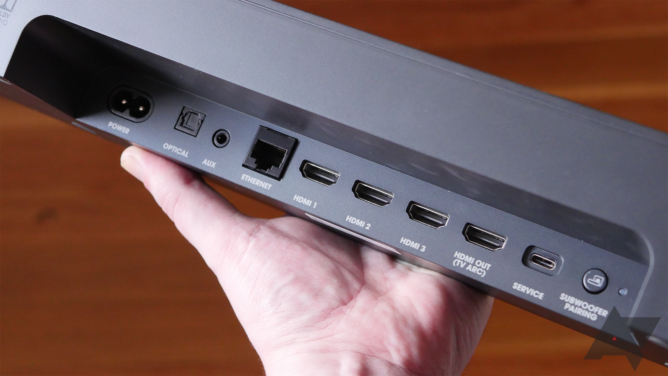 The Link Bar's multiple HDMI inputs are great for when you're looking to expand.

You can have a lot of fun simply using the Link Bar with a TV on its own, but it’s also a snap to set up with other devices. Its HDMI-out port supports audio return for using with a TV tuner, and a bank of three HDMI inputs is ready to connect to your game console, disc player, or whatever you want. The TV I’ve been testing with only has two HDMI ports of its own, so this hub is a real upgrade.

I love remotes. Controlling media via app or voice may be functional, but nothing beats the satisfying feel of a click and the instant response you get from a nice remote. I may appreciate the affordability and flexibility of a Chromecast, but had really been looking forward to what Android TV and a physical remote could do to enhance my experience. 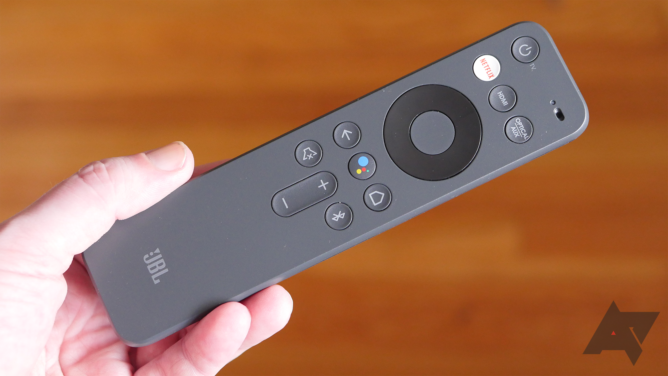 Why is it so hard to get an Android TV remote with a full set of buttons?

For the most part, JBL’s remote works well. A dedicated Assistant button lets you use voice controls without awkward “OK Google”s everywhere, and you have easy access to system navigation.

My biggest issue is the lack of playback-control buttons: no pause, no rewind/advance. The general-purpose directional controls frequently stand in as substitutes, but coming from a Fire TV Stick, I really miss having discrete inputs.

Branded remote buttons for particular apps are just about the tackiest thing ever, and the Link Bar gleefully sells out to Netflix. There are worse offenders, sure, but I would greatly prefer a generic software-configurable quick-launch button that wasn’t a perpetual Netflix ad in my hand.

There’s also the matter of dropped inputs; sometimes you’ll have to press a button several times before anything happens. It's like something's gone into standby mode and needs to wake, but I don't know if the issue is on the remote end or the Link Bar end.

It can be tempting when looking at Android TV devices to get wrapped up in criticism of the platform itself, so I’m going to do my best to focus on what specifically the JBL Link Bar is doing here. By and large, performance is acceptable. The nature of the Android TV UI leans towards the graphics-heavy, and while you’ll frequently see the system race to catch up on loading thumbnails, the Link Bar is generally up to the task. 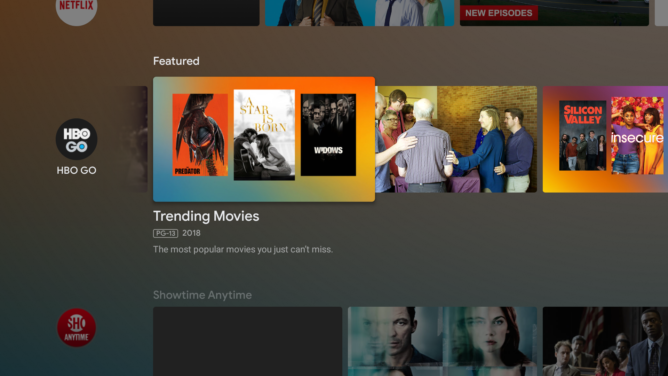 Of course, there are exceptions that prove the rule. Actually, quite a few of them; while writing this passage the Link Bar froze up on me when using Assistant, before spontaneously rebooting. While that’s one of the more extreme failures, app misbehavior is hard to avoid entirely, and you start to accept that once in a while something’s going to behave a little oddly. Again — how much of this on Android TV, how much on JBL, and how much on app devs? It's hard to get upset at anyone in particular. 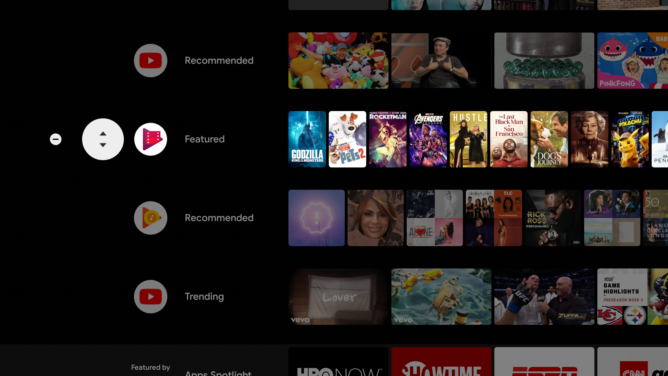 What’s more obviously a mistake on JBL’s part are the storage decisions made for the Link Bar: a paltry 4GB of internal space, no SD support, and no USB for flash drives (just a sole Type-C for diagnostics). While I love a lot of local storage for media, I realize I’m in the minority there, but what’s more likely to impact users is the limiting effect this has on the ability to install new apps. 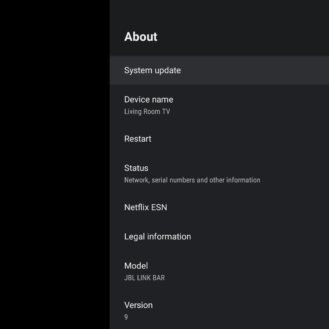 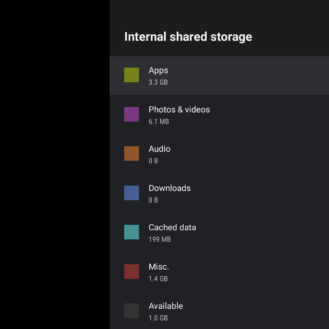 With just a few extra streaming services installed, I was already down to 2GB free (and even less by the time I grabbed these screens). God forbid you want to install a decent-sized game. Considering how fantastically cheap storage is, how was 4GB even on the table? 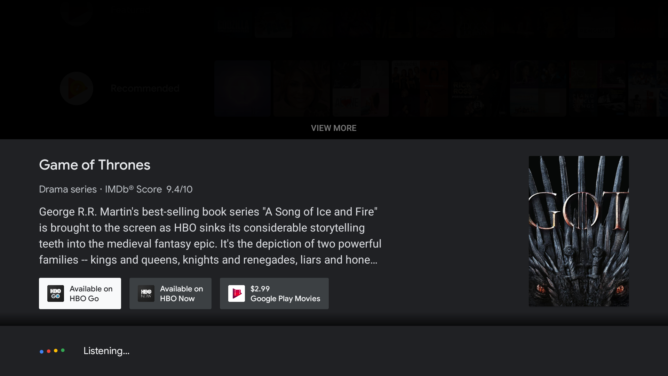 Assistant responding to "play Game of Thrones" with a list of available services. I wish it just defaulted to the one you have actively logged-in.

Maybe. The JBL Link Bar succeeds at what it sets out to do; in one fell swoop it smartens up even the most basic TV, upgrades your sound, and just generally expands your entertainment options. I wish the remote were a little more capable, I’m still upset about the Bar’s storage capacity, and software stability needs improvement — but even all that said, the functionality is right where it needs to be, and none of those failures are so large as to ruin the experience. 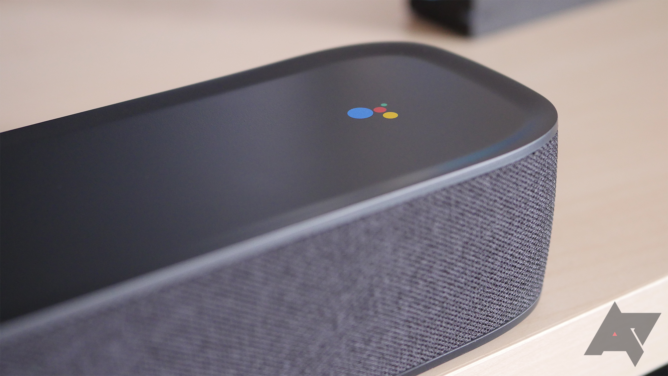 Just in case you forgot this has Assistant.

But it’s also $400. That might be as much as you spent on your TV itself, and while I like the Link Bar for what it is, it’s just a little too expensive right now. At $300 it would be a heck of a lot easier to recommend.

Convenience is king, you only stream from a few services, and you're down with what this remote offers.

You want to play games or install a lot of apps, it's really important that you get a good value, or you can't live with the odd freeze-up/reset.