Huawei 's consumer division chief Yu Chengdong was spotted in an airport in China by reporter Li Wei apparently waving around a slightly redesigned version of the Huawei Mate X. The phone was previously delayed amid Huawei's drama with the US government, while Samsung was also having its own folding phone troubles. In the meantime, the company has made a few subtle tweaks to the as-yet-unreleased Mate X. 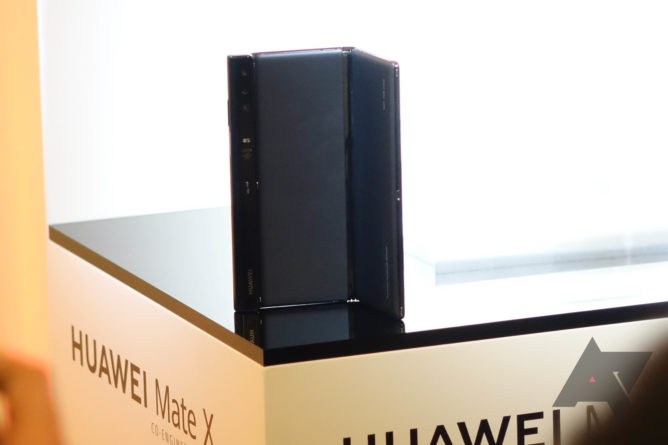 Above: Back of the Mate X as of February. Below: The back of the phone now. 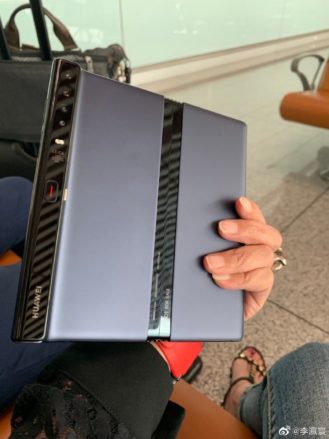 Several changes are visible around back. Noticeably, there is what looks like another optical assembly in the bank of cameras. Previously Huawei had three cameras around the back, but XDA Developers has spotted that the camera specs on Huawei's site now list a time of flight sensor, so that's likely what the new module is for.

Previously, the long strip covering the camera assembly's bulkier edge and hinge area as appeared to be plain and glossy (although an accent with accompanying text on the back of the phone in February alluded to a carbon fiber composite build for the largest panels). These recent photos seem to indicate that those long strips are either now also carbon fiber, or have been textured to appear that way.

The shape of the button which triggers the catch for the folding mechanism has also been changed to be a bit wider and less oblong, with a red line set in it. It isn't clear if other aspects of the phone, like the display, may have been redesigned in the wake of Samsung's folding fiasco. One of the photos (first in the gallery above) shows some wavy lines in the display's reflection, and previously AP's David spoke of a seeing a pre-production unit with a "wavy plastic" display that looked "hugely compromised." Given the irregularities in that reflection, we might not be looking at substantial changes, although the resolution of these new real-world photographs leaves plenty to be desired.

While these photos don't point to substantial changes, as always, we'll just have to wait and see how the $2,600 Mate X ends up once it's actually (finally) released.

The Mate X just popped up on Chinese regulator TENAA's site, with the same physical changes spotted before. Specs for the updated design are also included in with other regulatory details. The images agree with the version we saw in the executive's hands last month, showing the new larger folding mechanism release button and the addition of a new sensor in the camera cluster (likely the time of flight sensor added to the official spec sheet).

While carrier band support is sure to vary between markets, other specs listed in the TENAA filing include a 2.6GHz SoC, 4,400mAh battery and 8" 2480×2200 folding OLED display — nothing new outside a 100mAh smaller battery, but more confirmation that details weren't changed as a result of the physical tweaks. Physical size clocks in at 161.3×146.2×11mm and 300g. Other configuration options include 8-12GB of RAM and 128, 256, and 512GB storage sizes.

Neowin is reporting that the chipset powering the device may be bumped to a Kirin 990. The TENAA listing also states at least one color that the phone will come in: Star Blue. That's probably the version we see here.