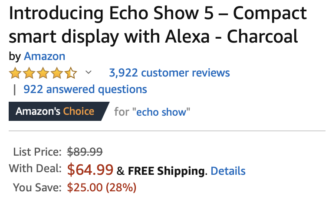 If you're unfamiliar with the Echo Show 5, it's essentially a miniature Echo Show with very similar features, as it's also powered by Alexa and has a built-in camera and microphone for video calls. Unfortunately, the 1MP sensor may be slightly limited compared to the Show's 5MP camera, but it's still reasonable given the Show costs $230. Similarly, the Show 5's speakers and display are slightly inferior in comparison to its sibling's, but this makes sense given the smaller display is mostly designed to be used as a smart clock. Lastly, if you're concerned about your privacy, the Show 5 has a physical camera shutter and a button to cut off its microphone for added peace of mind.

The discount is rather significant given how new the product is on the market, but it makes sense for Amazon to fight back against Lenovo, as the latter's Smart Clock is also on sale for $50. If video calls are important for you, I'd recommend going for the Echo Show 5, as the Lenovo Smart Clock doesn't have a camera.