One of the perks of YouTube's paid tier, YouTube Premium, is access to YouTube Originals — scripted programming more similar to traditional TV shows than most of the other content you'd find on YouTube. It seems the streaming platform is changing tack, though, as it's announced that Originals will be available without a subscription by 2020.

The shift to an ad-supported model is "to meet the growing demand of a more global fanbase," according to a statement obtained by Vanity Fair. The company says that it plans to make all its Originals programming available for free with ads by 2020. Ads appearing where they once did not offers advertisers a new canvas, and YouTube a new avenue to collect those sweet, sweet ad dollars.

YouTube made several feature films, including Rocky IV and Legally Blonde, available on its platform for free with ads last week. Once Originals are free, Premium subscribers will be able to see them earlier than non-subscribers — and still without ads, of course.

YouTube has started sending emails stating original content will be available to everyone starting September 24th. However, YouTube Originals won't become freely available until a short period after they are released, and bonus footage/extended versions will still require Premium in most cases. 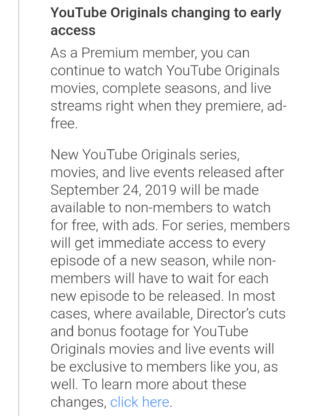