Wireless chargers are convenient in many ways: Not only do they spare you the need to attach a cable to your phone, they're also handy if you have multiple devices with different ports. Samsung's dual wireless chargers take this amenity to the next level, as they can charge two devices wirelessly at the same time using a single cable. You can snatch them at a discount, as the Qi Wireless Charger Duo and Wireless Charger Duo Pad, which features Fast Charge 2.0, are down to $50 and $70, respectively. 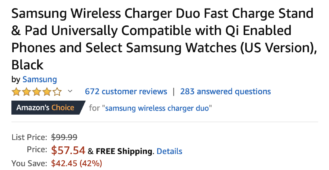 The Wireless Charger Duo Pad features two charging pads, with the left one supporting up to 12W output thanks to Fast Charge 2.0. The smaller one on the right is designed to house phones and smartwatches, but can only deliver up to 7W, which means your second device will charge more slowly. The pads can function simultaneously and work with any Qi-certified device, including Samsung Galaxy handsets and iPhones.

Since the pad may get warm when charging two devices at once, a built-in cooling fan kicks in to dissipate the heat. Lastly, to make sure your devices fill up as quickly as possible, Samsung has included a fast wall charger and a USB-C cable in the box, so you won't have to buy anything else to use your product. Only the black version is down to $70, which is $15 less than the original retail price. The white one doesn't receive any markdown and is probably not worth paying the extra amount.

If you'd rather use a dual charger that has a stand, the Qi Wireless Charger Duo dropped to $50, which is half its original retail price. While it doesn't have Fast Charge 2.0, it retains most of its sibling's features, including USB-C connectivity and built-in ventilation, and ships with a 25W wall charger. It's also $20 cheaper than the Wireless Charger Duo Pad and may be more convenient if you don't mind the slower speeds. Unfortunately, only the white version is available at that price, but you can get the black one from Amazon for $8 more.