Smartphone cameras have come a long way in the last decade, and for many people, they've completely replaced dedicated cameras. They're smaller and lighter, easier to travel with, and you don't have to offload the photos before doing something with them. But that doesn't mean we don't miss a few things from DSLRs or point and shoots, like a comfortable hand grip or a physical shutter button. Plenty of companies have released smartphone camera grips, but Adonit has updated its original version with a new design and packed in wireless charging so you can get more pictures without worrying about your phone dying mid-trip. 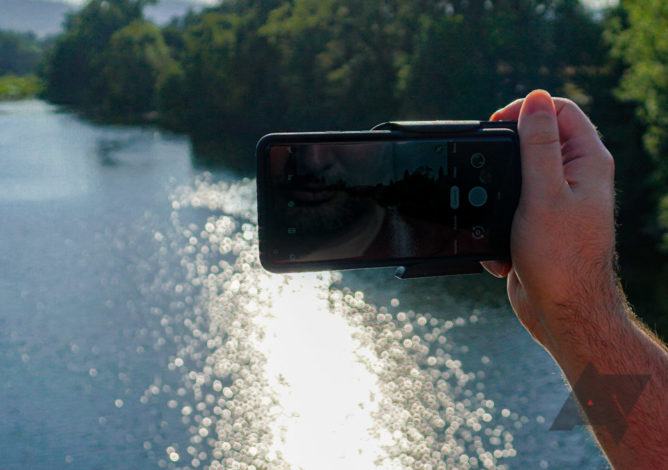 The PhotoGrip Qi itself is a pretty straightforward design that merges an ergonomic grip to a spring loaded smartphone mount. The grip is modeled after most standard DSLR cameras with a (very non-slip) textured rubber coating. It's pretty comfortable to use and it's far more stable than holding a phone by itself. It should fit into most peoples' hands regardless of size. Unlike a typical DSLR, this isn't meant to fill your entire palm, it just fits against the padded area where your fingers meet the hand.

The phone mount has the perfect amount of pressure to keep a tight fit, but it's not so stiff that you can't squeeze a phone into it quickly without changing your grip. I had no trouble fitting in every phone I own. It easily stretches to accomodate a Galaxy Note 5 with plenty of room to spare for even wider phones, but my old iPhone 4 was the smallest device that would stay safely seated. The jaws also accomodate most average smartphone cases, like the Moment Photo Cases used in some of the pictures in this review.

A Qi wireless charging coil is hidden in the mount with a 3000mAh battery in the grip. That's not going to become a full charge for most phones, but it'll help you survive a lot of heavy use or a long day. There's no support for proprietary fast charging modes, so you'll get a standard 5W rate. A button on top activates charging with a single press and turns it off with a double-press. Unlike most smartphone accessories out there right now, this also charges via USB-C. Unfortunately, the port isn't bidirectional, so it can't be used to charge a phone without wireless charging. If you want the grip without Qi charging, it may be worth looking into the original version.

The shutter button connects to your phone via Bluetooth and it can slide out to trigger shots at a distance. The range is about 30 feet (10 meters) and there's almost no delay between pressing the button and getting the shot. A standard CR2016 coin battery powers the remote trigger and is supposedly good for about 1000 shots. I know it would have raised the price and probably isn't practical, but a small part of me would have liked a rechargeable battery that automatically tops off while it's in the mount. 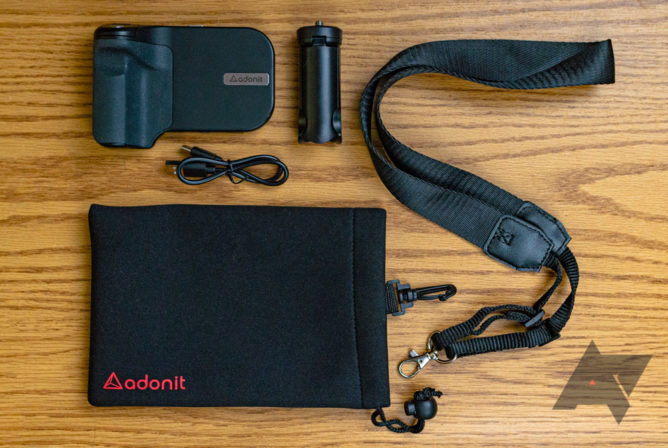 A few accessories accompany the PhotoGrip Qi. You'll find a neoprene carrying bag with a neck lanyard, both of about medium quality. There's also a short 6-inch USB A-to-C cable for charging the PhotoGrip and a mini tripod with a standard 1/4-20 screw mount.

The tripod is incredibly useful and is basically the perfect size. It's even a good shape to use as a handle when the legs are closed down. However, it's plastic-y, the legs are a bit too loose, and there's no way to adjust their length or angle. You'll have to stack random objects under the legs if you want to angle your camera up or down.

My single serious complaint about the design came to me when I realized there's no attachment point on the camera grip for a wrist strap. Even though it's easy to have a good hold, I still feel nervous about not having it strapped to me when holding it out over the edge of a bridge. If you share this particular concern, I would advise picking a smartphone case that can support a wrist strap.

The PhotoGrip Qi in use

A smartphone camera grip probably won't see much day-to-day use unless you're determined to take pictures or video on a regular basis. It's not a large item, but it's sizeable enough that it won't fit comfortably into most pockets, especially with the shape it creates, making it not unlike other external batteries and dedicated cameras.

While I didn't have any vacations or photo tours lined up in time for this review, it's pretty obvious that those are the types of situations where the PhotoGrip Qi will shine. If you're out sightseeing and using your phone for pictures, it probably won't be put away very often, you'll be burning through battery quite a bit with the screen on, and there's a good chance you'll have to go a long time between charges. If you're going with a group, or just want better selfies, the remote trigger and tripod give you a lot of options for framing the shot. 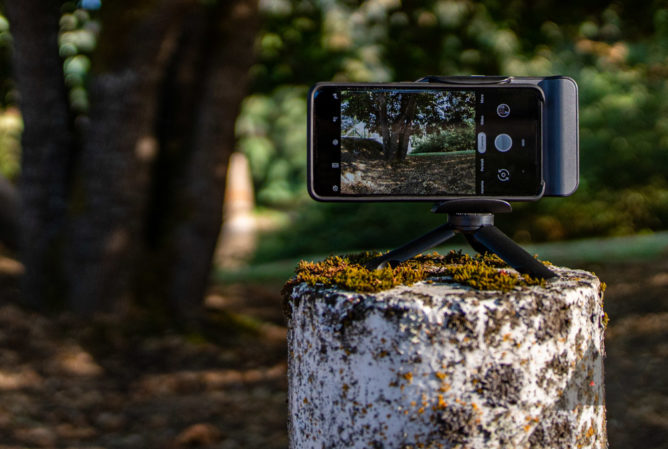 The PhotoGrip Qi may be good for handheld shooting, but I quickly realized there were other use cases I liked even more: Timelapses, long exposures, and video recordings. Thanks to a 1/4-20 mount on the bottom that's compatible with most tripod heads and the integrated battery, it's possible to put your phone just about anywhere and leave it running for several hours before the battery dries up.

Yes. If you're looking for a camera grip for your phone and will use it enough to justify the price, the PhotoGrip Qi is a great option. It feels good in the hand and helps steady the camera if your hands are shaky. Wireless charging and the remote shutter button really do make good additions to the package.

Of course, not everybody needs or will get enough use out of a smartphone camera grip, and this one might feel a bit spendy at a regular price of $60. If you're frugal, I'm sure you could find a grip, external battery, remote shutter, and just the other accessories you want for a lower combined cost. However, it's probably worth spending a few more bucks to get everything integrated.