Earlier this week, Spotify unceremoniously killed its Android widget, taking away home screen-based controls for the streaming service. Odds are that most of you didn't notice — or if you did, you probably didn't care too much since you can still use the ongoing notification's controls during playback — but for those that were upset at the loss, there's a workaround. Using Tasker and KWGT, you can re-create a convincing approximation of Spotify's lost widget.

The following video, hosted on Tasker developer João Dias's AutoApps YouTube channel, provides a simple step-by-step process for how to enable the widget, though you might want to make sure you have installed and set up/run both Tasker and KWGT previously to make sure the steps are the same.

The process is simple. Essentially, all you need to do is import this Tasker project, run the project's launch task, add a 4x1 KWGT widget to your launcher's home screen, and select the new "Music Control" widget in KWGT, adding it to your homescreen.

Screenshots of the widget setup process.

The only issues I ran into adding the widget via this method were a problem with default scaling in KWGT, easily fixed by tweaking the specific widget's scaling settings in KWGT (KWGT -> Music Control -> Layer -> Scale: 100), and album art being broken, which I wasn't able to fix. Controls and track/artist details otherwise generally worked as expected, though once in a while the play/pause button would appear to be in the wrong state. 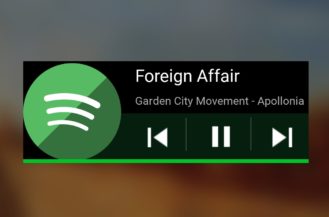 It isn't quite a perfect match visually for the real Spotify widget — iconography, spacing, relative sizes, and colors are slightly different — but it's close enough. And, like all KWGT widgets, you can also customize it further to fit your home screen's desired aesthetic, swapping details like icon shapes/positions or colors to match whatever theme you prefer. It also works with Play Music, too.

João tells us that AutoNotification is required for album artwork to function, which explains why it didn't work for us, so you'll need to install it for that feature in the widget to work.

Tip: If you still don't have the new Android Auto, check your app settings