Android Q is nearing a stable release, but there are still tidbits of new information surfacing. Back in July, when Google accidentally pushed an internal test build to the public, XDA Developers found hints that the latest OS version could support advanced customization options for Pixels. They should allow owners to choose clocks, styles, wallpapers, and more. In Beta 6, some users saw evidence that this could indeed end up in the final release when they got the Settings suggestion to "Customize your Pixel." Tapping it leads to the pre-installed wallpaper app for now, though.

Some new clock options were already available in the first Android Q Beta, hidden behind ADB commands. Back then, it wasn't too unlikely that the customizations could only be available as source code meant to help OEMs build their own interfaces. XDA Developer's unreleased build already countered this idea when strings detailing customization options to users surfaced. And as you can see in the screenshots, these strings are now live for some and prompt people to try "different styles, wallpapers, clocks, and more" in the Settings app. 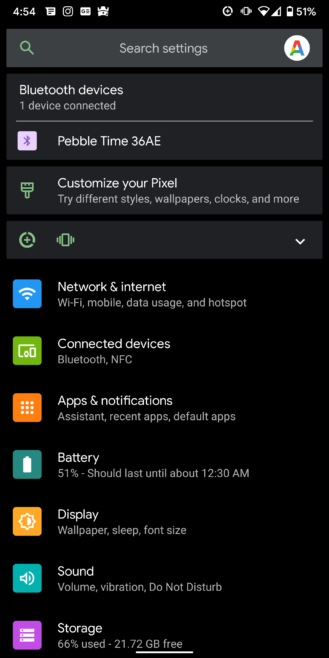 Tapping on the suggestion leads to the wallpaper app, which naturally only allows you to change wallpapers. It's likely Google is still working on releasing an updated or rethought app that hooks into APIs, allowing users to customize their experience once Android Q is released. Other possibilities include Google saving this capability for a minor update or the Pixel 4. Either way, it's nice to see that the company is adding more customizability to its software again. While there's no way Android Q will be as customizable as OS versions up to Pie that supported Substratum theming, it hopefully appeases some people unhappy with the default interface.