The selection of "truly wireless" earbuds is truly staggering these days. They've gone from being crazy expensive status symbols to the norm, with surprisingly cheap models available. But even at $100, mid-range options like the Optoma NuForce BE Free6 still need to make some compromises to hit that price. You get good sound, decent battery life, and USB Type-C charging, but I had some serious problems when it came to fit, and there's no app for updates or other functionality.

The Optoma NuForce BE Free6 has a long name, but the design is similar to what you've seen before. "Truly wireless" earbuds come in two general shapes: AirPods-style units with a long dangling "handle," or something more like an ovoid with a flat side. This is the latter.

Those flat faces are also click-in buttons for simple controls. (They're not capacitive, if you hate that sort of thing.) The provided controls are the same for both the left and right earbud, multiplexing off a single button:

The only noteworthy omission is volume, which is too bad.

I'm not the sort of person to have problems with earbud-style headphones, but that wasn't the case with the BE Free6. No matter what I did, no matter which size tips I used, I could not get the right earbud to seat itself consistently for any long period of time, and both could work themselves out fairly easily. The shape of this particular set of earbuds was somehow fundamentally incompatible with my ears. The seal on the right side would break while on the elliptical for more than thirty seconds at the gym, or even if I just smiled, and it wouldn't go back into position on its own.

I don't know if it was the size, weight, shape, or length of the earbuds which contributed most to my issue and the generally precarious feeling which resulted. If I don't get too sweaty at the gym and don't bounce around too much, they might stay in with only the occasional jab to shove them back in place, but I spent most of my time making near-constant adjustments to maintain a seal — or just keep them from falling out. Even with that precaution, they still frequently went tumbling or flying across the grimy rubber floor. If they had the "ear wing" style design that secures itself with a little rubber finger to other crannies in your ear (like Jaybird's earbuds have), they might have stayed in place better.

Ear shapes vary, someone else might have no problem at all, but I feel the need to note that I have never run into this issue with in-ear headphones before, and much cheaper truly wireless earbuds have stayed seated for me without any problem. 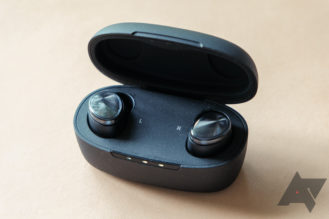 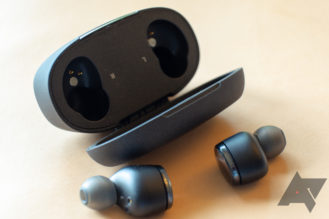 The buds themselves are stored and charged in a vaguely oval case, which itself charges with USB Type-C, as everything in 2019 and forward should. It's a rough "sandstone"-like plastic that gets marked up easily when scratched and secures shut with a magnet. Three LEDs on the front indicate the current charge when opened or charging. 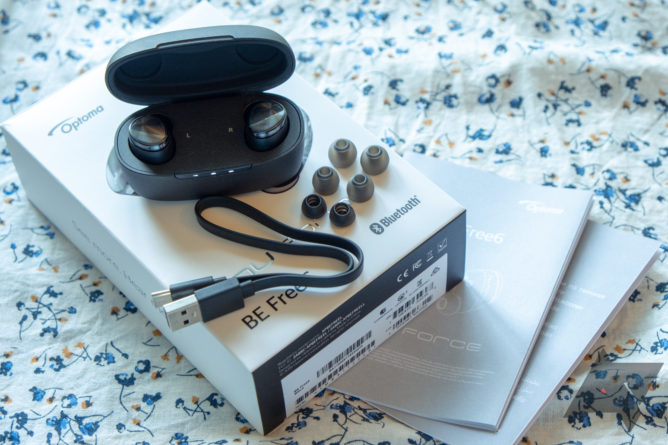 The earbuds come with four sizes of eartips, a short USB Type-A to C cable for charging, and the usual warranty/manual cards.

I enjoyed the sound produced by the Optoma NuForce BE Free6, though I'm not sure if they were objectively great.

Lots of earbuds have a claustrophobic feeling, with very shrill and narrow sound, and the BE Free6 did feel wider, lighter, and a bit more airy than most of the cheap true wireless earbuds I've used recently. The "sound stage" (a fancy term for where it seems the sound is coming from physically) was reasonably wide for a pair of earbuds, and I didn't get the closed-off feeling of sound originating from inside my own skull too often.

The 5.6mm drivers aren't quite as big as the 6mm ones in the Soundcore Liberty Air, but the bass was notable and quite good once you got a good seal. You won't get the really deep thumping you might on larger drivers like a home theater system or your car stereo, but I thought it was more than adequate for a pair of earbuds. It felt like the overall sound profile had a "V" shape (i.e., it was stronger in the bass and treble for a more pop-friendly disposition). I still liked it, though the upper mids could feel a bit weak at times, drowning out vocals.

Although they produced some decent sound, my expectations were moderated by the $100 price. Ryan was quite wowed by the Anker Soundcore Liberty Air, which are $20 less and have a shape that might fit more ears better. 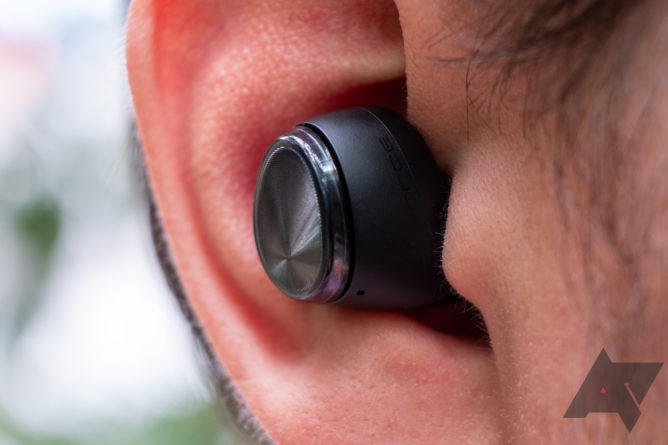 Latency was anecdotally inconsistent. At times I didn't notice it even during fast-paced video, at other (inconsistent, infrequent, but unpredictable) times it was very noticeable. In general, if I was looking for it and paying very close attention to quick motions associated with sounds, I could tell it was out of sync, but it wasn't a problem watching Star Trek on the elliptical at the gym.

Probably because they're Bluetooth 5, the earbuds can be used individually, and even be paired separately if you need it. Optoma has a video that details the process to split the earbuds up for separate mono use, and though it is a bit tedious, it's an option on long trips.

The quality of the mic in calls was tinny but not terrible, and more than fine according to the people I spoke to. It even did an okay job isolating me from ambient noise like an air conditioner a few feet away. Unless you have very high standards, it should be fine for calls.

I wasn't able to test the full longevity claimed by Optoma; there are precisely zero circumstances where I need to wear a pair of earbuds for over six hours. In typical day-to-day operation, two hours of continuous use at a reasonable volume without popping them back on the charger was no issue. The case needed to be charged a bit less than once a week when using the headphones for about two hours a day. In all, I think that's more than adequate battery life. And when you do need to charge them, I would like to note again that they top up over USB Type-C as everything should.

Yes. In general, I liked the sound and features present on the BE Free6 — though ear detection and an app for updates would be nice — but I feel the need to reiterate one point before I make a blanket recommendation: I can't overstate how poorly the headphones fit for me. Nothing I could do and no eartip size mattered in the end, and that made them very unpleasant to use, even if I liked the sound. 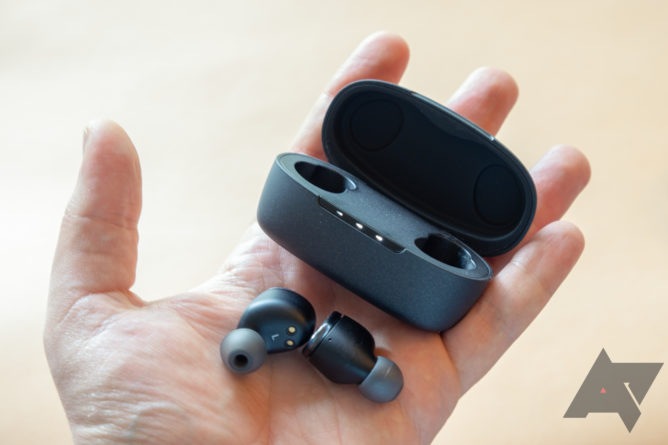 Again, different folks have different ear shapes, and these may be a perfect fit for you. If it weren't for my own issues, I'd have been perfectly satisfied with them as a pair of decent mid-range truly wireless earbuds with USB Type-C charging. They lack a few bells and whistles, but they sound good and don't use an outdated charger — for some, that's enough.

Separately from my problem with ergonomics, there is a question of value, though. While I liked the sound of the BE Free6, Ryan was equally impressed with the Soundcore Liberty Air, and they're $20 cheaper with a design that is less likely to experience issues with fit. You'll be moving back to antiquated Micro USB for charging, but it might be worth the discount. On the other hand, for just $30 more you can get the Galaxy Buds which have both Type-C charging and the convenience/functionality of a dedicated app. That places the BE Free6 right in between two options that could be better choices for most.

Optoma only sells the NuForce BE Free6 through Amazon: