We're in the early days of 5G in the US with carriers like Verizon scrambling to deploy millimeter wave and Sprint focusing on mid-band networks. Carriers are talking up the blazing speed of 5G, but how fast are we talking here? Speedtest has measured 5G performance in Verizon and Sprint markets to get a better idea, and unsurprisingly, Verizon's 5G is much, much faster.

The individual city-by-city results are very consistent. Verizon is nearing a gigabit average in most markets—actually crossing that mark in Providence. Sprint averages between 200 and 300Mbps everywhere. Verizon's maximum speeds are in excess of 2Gbps, and Sprint doesn't even pass 1 gigabit. Speedtest also saw some hints that 5G upload speeds are improving. 5G NSA (non-standalone) deployments use LTE for network management, so uploads are usually no different than 4G. However, Chicago (Sprint) and Providence (Verizon) have shown marked improvements in upload speeds, possibly thanks to new Samsung network hardware. Again, Verizon is much faster (50Mbps vs 20Mbps). 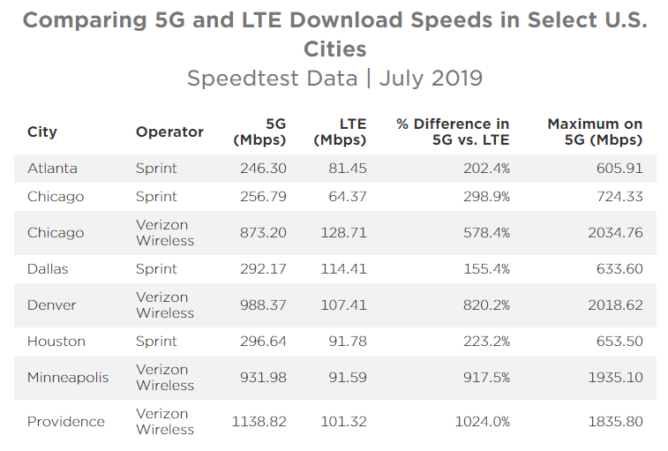 So, that's all great if you only care about speed. Verizon's millimeter wave spectrum is great at delivering data quickly, but the coverage is poor. Sprint's 2.5GHz 5G can actually cover wide swaths of cities with service twice as fast as LTE. That might be more valuable in the long term, and it's why T-Mobile is keen to absorb the smaller carrier. We won't really know who has the best 5G network until we see how carriers merge millimeter wave and lower-frequency bands.