The European smartphone market is incredibly fast-moving — brand loyalty isn't high, especially with users of lower-end devices. When you compare this year's second financial quarter with the same period from last year, you can see how quickly things change. Samsung and Xiaomi are clear winners in Q2 2019 with 20% and 48% annual growth respectively, while Apple, Huawei, and HMD Global (Nokia) market shares shrank by at least 16%.

Samsung accounted for about 40% of the market with 18.3 million shipments, up from just 34% in 2018. Even though the company struggled internationally last quarter, its European business continues to build on its strong foundation. Analyst firm Canalys sees the company's revamped mid-range device lineup as a leading cause of the Korean company's surge:

It has brought a blitz of competitive new devices to market, focusing on its A series, which accounted for over 12 million units. Its top four models in this range, the Galaxy A10, A20e, A40, and A50, together shipped more units than any other vendor in Europe managed with their entire range of smartphones.

Huawei's US trade ban troubles are deemed another reason for Samsung's strong return: "Samsung has been quick to capitalize on Huawei’s US Entity List problems, working behind the scenes to position itself as a stable alternative in conversations with important retailers and operators." 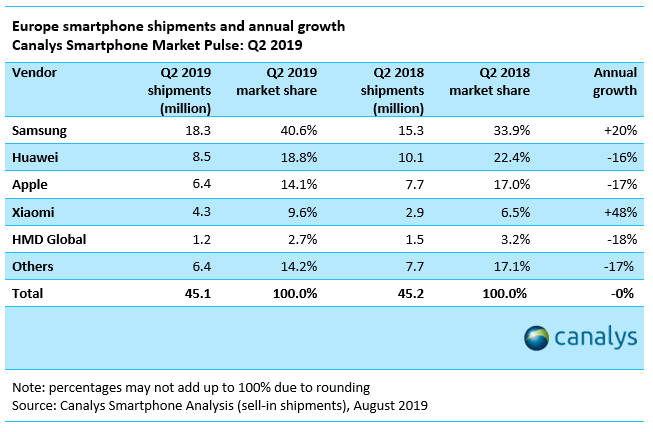 With Huawei losing ground, it's left room for another Chinese company to make big gains in the European market. Xiaomi's 48% rise in shipments takes it to a market share of 10%, which is mainly attributed to carriers and retailers trying to keep Samsung in check, as Canalys Analyst Mo Jia says: "Distributors, retailers, and mobile operators are actively seeking alternative brands to fill the gap and reduce their dependence on Samsung."

HMD Global – which only started selling Nokia-branded phones in 2017 – saw its market share shrink to a mere 3% last quarter. The company's confusing naming scheme, plethora of almost indistinguishable devices, and lack of a compelling flagship are preventing HMD from selling as many phones as it might hope to. 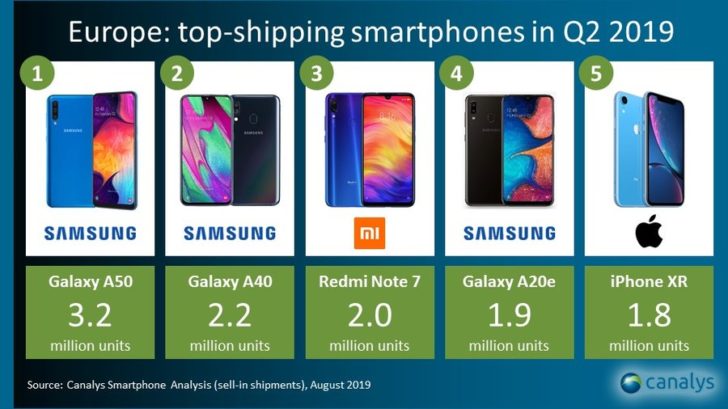 Even though Apple's market share has fallen by around 3%, its most reasonably priced recent phone still remains in the top five Q2 bestsellers — the iPhone XR is in fifth spot behind three Galaxy phones (A50, A40, A20e) and Xiaomi's Redmi Note 7.

Facebook is working on a dark mode for its Android app