If you're looking for a decent phone with high-end specs and don't want to break the bank, look no more: LG's latest flagship just dropped to $500 on Amazon, which is a very reasonable price given its internals. Since the handset was selling for $850 when it came out in April, the $350 markdown in such a short time is quite impressive. 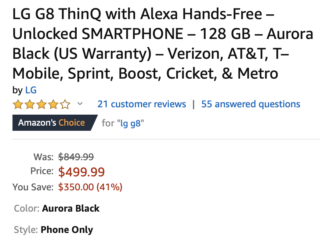 Despite this seemingly low price, the G8 remains a high-end device, and as such has respectable components, including a 6.1" AMOLED display, 128GB of internal storage, 6GB of RAM, and a Snapdragon 855 processor. It also has two rear cameras, a main 12MP one and a 16MP wide-angle shooter, as well as an 8MP selfie camera. LG has also kept the 3.5mm headphone jack, which has become quite an oddity lately.

The device is sold unlocked and with a US warranty. This particular deal applies to the phone's Alexa version, which means it comes with a few Amazon apps preinstalled. The G8 works on both CDMA and GSM bands, which means it's compatible with most US carriers, including AT&T, T–Mobile, Verizon, Sprint, Boost, Cricket, and MetroPCS. If you'd like to know more about the phone, check out our review to help you decide.