The Nokia 7.1 was released a year ago and remains one of the most relevant budget devices on the market. The phone was initially priced at $350 when it came out, but it's dropped to $300 a couple of times since then. The handset has now reached an all-time-low, as several retailers are selling it for just $250.

If you're unfamiliar with the handset, it's powered by a Snapdragon 636 processor and 4GB of RAM. It also has 64GB of internal storage, a microSD card slot, a 5.84" 1080p display, a 3,060mAh battery, and a headphone jack. Plus, although the Nokia 7.1 originally shipped with Android 8.1 Oreo, it's been updated to Pie since. 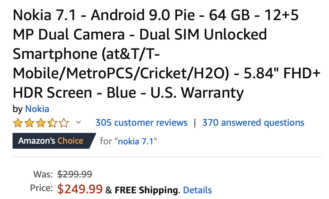 In his review, our very own Ryan liked the phone's build quality and form-factor, but was disappointed by its performance. Still, the device remains quite interesting given its price, and some users claim the latest updates made it a bit snappier.

If you're interested in getting one, the Nokia 7.1's price has dropped to $250 on Amazon and Best Buy. The latter will also give you an additional $50 off if you activate the phone on a supported carrier the day of your purchase. In any case, both retailers offer the phon's unlocked version, which includes a one-year US Warranty.

After shortly climbing back to its original price, the device is back to $250 on both Amazon and Best Buy, with B&H also selling the phone for $250 now. Like last time, you can save an extra $50 with Best Buy's Activate today and pay just $200. Alternatively, B&H is offering a free TPU case and a three-month prepaid SIM card with 8GB of data with the phone.