The highly-competitive smartphone industry has plenty of numbers games it plays. One of them is with camera resolution: the next big milestone to reach is the magic 100MP mark and companies are jockeying for pole position. In the latest shuffle, Samsung, which makes smartphone cameras, and Xiaomi, a longtime supply client, have jointly announced that 64MP and 108MP (!) cameras are coming to the Chinese OEM's phones.

The 64MP sensor, which was announced back in May, was already previously teased by Redmi, Xiaomi's budget-focused spin-off phone business, to be on one of its future devices — this joint announcement just makes that super clear. We also find out from infographics on Xiaomi's Twitter post that the part sizes up to 1/1.7" with a 9248 x 6936 resolution on 1.6μm pixels. When it comes to shooting a regular JPEG, raw files are binned down to 16MP. In a specialized 64MP shooting mode, extra color processing is done through a process called remoasicing as the sensor has RGB subpixels that are larger than the photo sites. 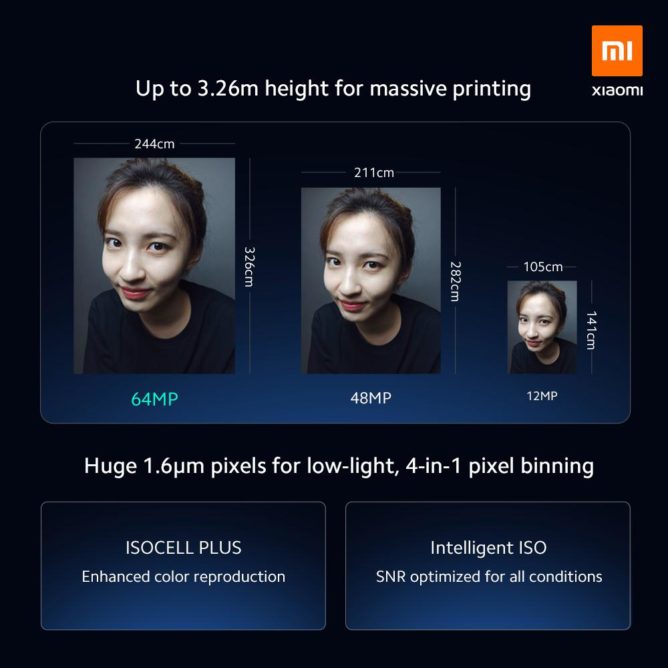 Xiaomi is also promoting what will technically be either a 108MP or 103MP camera, depending on how you count megapixels — that's 12032 x 9024 resolution divided by 1,000 or 1,024— yet to be formally announced by Samsung, that will come to one of its future own-brand phones. Perhaps 100MP might just be the better route of reference from here on out.

Xiaomi has posted a full release on its blog talking more about Samsung's 100MP sensor, to be known as the HMX. With that much space, the company boasts that a 2x crop will still have 27 megapixels of resolution to look through. And that's pretty much it.

This so-called "joint announcement" turned out to be quite disjointed as Samsung only put out a press release on its ISOCELL Bright HMX sensor this morning.

As opposed to Xiaomi, it defines the sensor's effective output as 108MP with video recording capability going up to 6K (6016 x 3384) at 30 frames per second. With the field measuring in at 1/1.33", photo sites come to 0.8μm, but with pixel binning (four sites acting as one), they can produce a pretty stunning single 27MP image.

The ISOCELL Bright HMX will head into volume production by the end of the month.

YouTube Super Chats can now be purchased in 19 more countries