The Pixel 4 is rumored to be the first in Google's own series of Android phones to feature more than one rear camera — one of them is said to be a 16MP telephoto camera. With Chinese smartphones going full-on brag with composite zoom figures of up to 50x, you'd like to believe that the already-great Pixel imaging software could help out. Now we're seeing what may be our first look at how far away a Pixel 4 can zoom in... and still bring out a nice picture.

The supposed sample in question comes from the Instagram account of Claude Zellweger, identified on LinkedIn as a director of design at Google. While the description didn't proffer anything terribly interesting for our purposes, one Alberto Villarreal, who is a creative lead on Google's Pixel division, commented on the picture. Then, Zellweger replied with a big tell on what he used to take the photo. 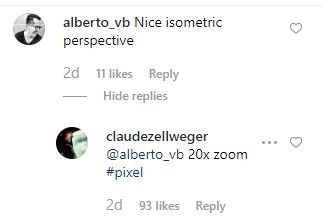 20x zoom on a Pixel? Well, that's something novel — up to this stage, Pixel phones have only gone up to 10x digital zoom. That's led plenty of people to speculate that this is the first known sample of the Pixel 4's camerawork. As of right now, we're less sure about a DSLR-like hardware "attachment" coming into the fore in favor of extra software improvements, but however the phone took this photo, it's pretty a good show of limiting luminance noise in the shadowy patches and not mushing up details such as the crosshatch patterning in the wood bench, stage right.

That said, there's months of work (and unsubtle messaging to hardware geeks) to go before things can be considered final — we do expect another Pixel launch event to come in October.

Zellweger says it's a Pixel 3a

Just prior to publishing our story, Zellweger commented again on his post, saying that the photo was shot with a Pixel 3a.

The hardware hype for the Pixel 4 might be washed out, but this could still have been a software demo in action to show the potential of advanced software zoom — in that sense, maybe we still have something being passed on to a Pixel 4 here.