In case you were living under a rock this past week, it was hard to miss Samsung's big reveal for the Galaxy Note10. It was all over social media, news sites, televisions, and... notification trays. That's right, Samsung is once again spamming Galaxy phones with advertisements, this time for the Note10.

This time around, push notifications advertising the Note10 are being sent out by at least three pre-installed applications — Samsung Pay, Bixby, and the Samsung Push Service. Bixby wants you to ask it about the Note10, Samsung Pay is offering points when you look at the phone's product page, and Samsung Push Service just gives you a banner ad with no indication of where it came from. I received the Bixby ad on my international Galaxy S10e, but I haven't personally seen the others.

Got this on my Note9. Not sure if it's because my Note9 thinks it's a Note10 or if it's an ad. pic.twitter.com/CeD2KfmidE

Check this out. Did you know the Note 10 is at AT&T? Verizon? T-Mobile? pic.twitter.com/36GhYGA4Zn

To make matters even worse, Samsung has blocked disabling these alerts by holding down on them, at least for the Bixby app (again, I can't verify the other types of alerts). To disable the Bixby notifications, you have to open Bixby, tap the menu icon at the top-right, select Settings, and set 'Marketing notifications' to off. 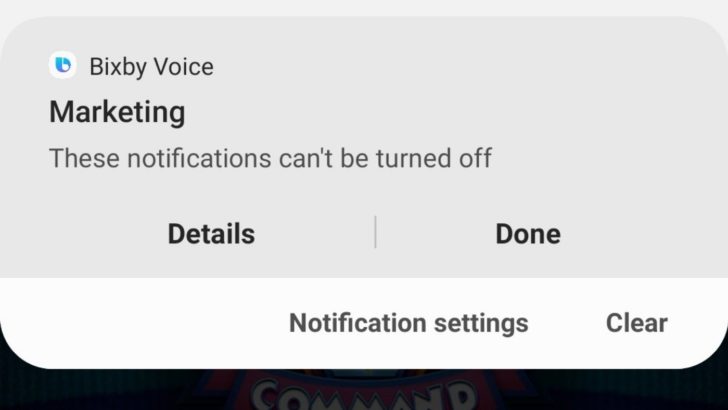 Samsung doesn't make it easy to turn off Bixby's notifications.

Samsung has a long history of sending advertisements to people who already paid for Galaxy phones. Alerts about the Galaxy S6+ Edge were sent out in 2015, the pre-installed 'Game Optimizing Service' was being used to advertise games in 2017, and Galaxy S9 ads appeared last year.

It's already annoying that Samsung is trying to sell a $900+ smartphone to people who already paid hundreds of dollars for their Galaxy device, but sending multiple notifications within a day or two is next-level anti-consumer behavior. Of course, Samsung isn't the only culprit, but it is a repeat offender.