Much controversy has surrounded the new gesture navigation in Android Q. While some people love it, others prefer the old three-button layout (or depend on it due to impairments), and some even prefer Pie's two-button navigation. Google put a lot of thought into creating the new system, working together with OEMs, and is confident that its solution is the best. The company goes to great lengths to prove this with some statistics published in a blog post on Thursday.

Android UI product managers Allen Huang and Rohan Shah explain that they've chosen the fully gestural navigation because it's faster, more intentional, and more immersive than software buttons. They're aware of its drawbacks, too: Gestures don't work for everyone, they're harder to learn, and – most important for the vocal minority of Android fans – they interfere with app's slide-out drawers. Apparently, though, only 3-7 percent of people swipe to open drawers in Google apps, the rest tap the hamburger button. Thus, the back gesture should work without issues for most outside of our enthusiast bubble. Similarly, Google found that many people quickly managed to operate carousels and swipes without accidentally triggering a back action.

Although gesture navigation might be harder to learn, it should, in the end, help you move around your phone faster than before. That's because the Android team "built prototypes of many different gesture models, comparing user ratings and timed user tasks on what ultimately became the Q model to several other navigation paradigms." When compared, the final gestures appear to work best, according to Google's findings:

Comparison of average time required to complete home and back tasks across various navigation modes (lower is better).

A drawback is indeed the hard access to the multitasking screen, which could be retrieved faster with the three-button navigation. Google claims the average person barely uses the recents overview, so the slight loss of speed was neglectable in Google's opinion.

Interestingly, surveyed testers only felt the new navigation mode was slightly less ergonomic than the three-button layout while providing some improvements on one-handed usability. 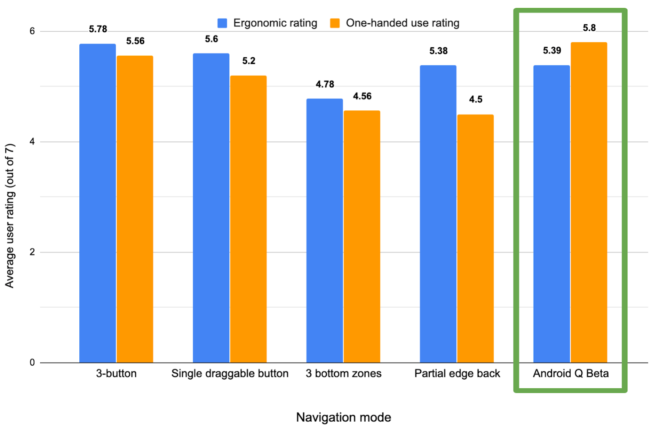 Still, the new gestures have quite a learning curve: "In our Q model, we found that usage of Back goes down for the first 1-3 days. After that period, the average # of Back presses/day ends up being the same as 3-button and our P navigation."

Another reason for developing this new system is fragmentation. The team "realized that there was a larger issue of fragmentation when different Android phones had different gestures, especially for Android developers." To make developing easier again, Google decided on making its own gestures mandatory. The company communicated with its hardware partners to make sure they work for all of them.

Note that Google is keeping the three-button navigation around for users with motion impairments and for those who simply prefer using buttons over gestures, much like it did over the course of all Q betas.

With its blog post, Google is transparently showing how it develops towards the common denominator, not the vocal minority of fans. While many features have entered Android through Custom ROMs and power-user feedback, something like basic system navigation must work for everyone. It's interesting to take a step back and look beyond one's own use cases, which is probably something Google developers have to do all the time. If you'd like to dive deeper, be sure to check out the link below.