OnePlus entered the smartphone market with a bang when it launched its "flagship killer" back in 2014. While the company still sells phones for less than other competing flagships, it's now an established player. With smartphone growth slowly declining, OnePlus has decided on a new market to disrupt: television sets. OnePlus CEO Pete Lau has already revealed that he has a TV in the making, and further information has now leaked that points to multiple screen sizes.

When MySmartPrice dug into the Bluetooth SIG licensing website, it spotted entries for several OnePlus devices, all of them labeled "1+ LED TV." The model names range from 43Q2IN through 55Q1IN, 65Q2CN, 75Q2CN to 75Q2US, suggesting screen diagonals of 43 to 75 inches. The last characters — IN, CN, and US — likey mean that the devices will be released in India, China, and the US to begin with. The certificates label all of them as "Unique android TVs" so it seems certain they'll all be using Android for the OS. 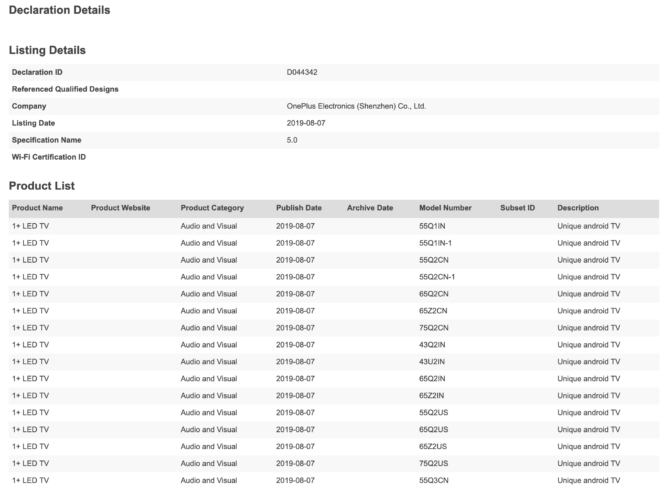 Since the Bluetooth SIG certified the OnePlus TV here, we now also know that it's coming with Bluetooth 5. This should make the previously leaked remote last pretty long on a single battery charge and might give you better audio streaming, should the TV support that.

In an interview with PCMag last year, OnePlus CEO Pete Lau said the TV is launching sometime in 2019, so the company still has about five months to make good on this promise. Besides the Bluetooth certification, the device needs to go through more regulatory hoops, so we'll likely see it pop up a few more times before the official unveiling.

[Update: 4G can now be activated] Mobvoi launches a revamped version of the TicWatch Pro with 4G/LTE