Wear OS smartwatches are seen as sub-par compared to the competition, mainly because most of them still use outdated processors or lack key features. With the TicWatch Pro, Mobvoi managed to design one of the most attractive intelligent timepieces powered by Google's OS on the market. However, despite its good selling points, the product lacked LTE connectivity, which prevented owners from using all their watch's features on the go. Thankfully, the manufacturer is announcing the TicWatch Pro 4G/LTE, which builds up on its predecessor's specs and adds 4G functionality on top, confirming the leak we reported last month. 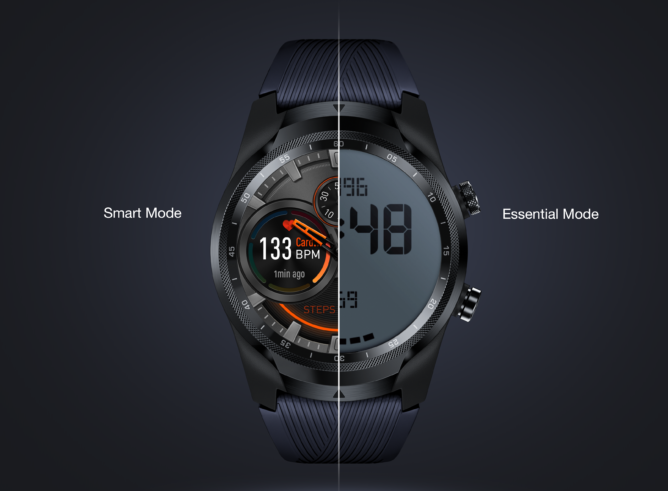 The Pro 4G/LTE retains the Pro's dual-screen technology, which layers a low-energy LCD display on top of an OLED screen. Thanks to these two panels, owners can switch between Essential and Smart modes, depending on what kind of information they want to see at a glance, and whether they'd like to extend battery life. The power-saving setting helps achieve an impressive 30 days of standby time, instead of the regular 48 hours. 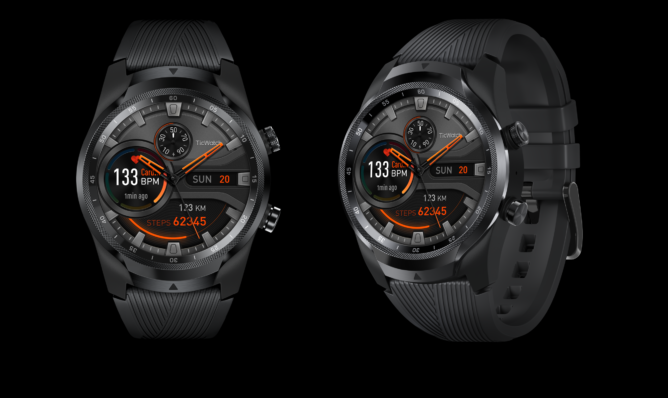 The main novelty with this smartwatch is, of course, its 4G connectivity, which makes it more complete than the previous iteration. Thanks to LTE support, you will be able to share your phone's number to place voice calls and send and receive messages, without the need for a smartphone. Similarly, your notifications can be synced through the cloud, allowing you to interact with them without having to download a separate app on your timepiece or to have your phone with you. This means you'll be able to reply to WhatsApp messages and emails directly from your watch, even if you forgot your phone at home or are away from Wi-Fi coverage. 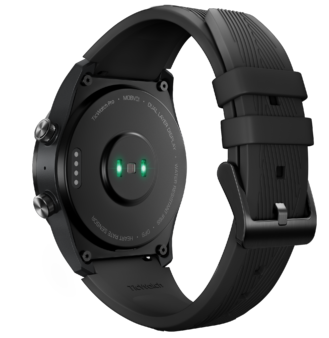 Mobvoi has also improved its TicMotion and TicPulse fitness and health tracking features. The first now lets you track your workouts without having to manually tell your watch to do so. It's also more granular in a sense that it can recognize more activities, such as fast-walking, and will soon be able to tell when you're swimming. Similarly, the second now tracks your heart rate proactively in the background, without the need for a smartphone.

In terms of other features, it's very similar to the TicWatch Pro, as it's got built-in NFC and GPS capability. It also has the same IP68+ rating and battery size, but comes with more memory and is 11g lighter. Unfortunately, Mobvoi continues to use the Snapdragon Wear 2100 SoC instead of the newer Wear 3100 chip, which would have meant even better battery life.

The TicWatch Pro 4G/LTE is available starting today with an official $299 MSRP. However, Mobvoi is offering a $20 early buyer discount if you purchase it before August 10. Unfortunately, there's a trick behind this markdown: The watch's LTE connectivity can't be activated before next month, which means people who buy it now will have to rely on Wi-Fi and Bluetooth until then. The Pro 4G/LTE is available on Amazon and Mobvoi's site, and can also be purchased from Verizon.

The watch's LTE connectivity can now be turned on so you can fully enjoy its 4G benefits. You can do so directly from the My Verizon app or by visiting a Big Red store. Unfortunately, the 4G network activation also means the device lost its $20 early buyer discount, which was Mobvoi's way of making early buyers wait until LTE could be turned on.

Mobvoi’s TicWatch Pro 4G/LTE, one of the only 4G/LTE Wear OS smartwatches powered by Wear OS by Google is available in the U.S. and introduces powerful proactive motion tracking features

The TicWatch Pro 4G/LTE is re-engineered to leverage its 4G/LTE wireless connectivity, and introduces new features including Number Sharing and Cloud Synchronization to keep you connected to important messages from your smartphone, without tethering your smartphone; TicMotion 2.0, the next generation of TicMotion, which automatically tracks your workouts without manually tapping a mode to begin recording your workout; and TicPulse, Mobvoi’s new health AI assistant that tracks your heart rate proactively in the background. The TicWatch Pro 4G/LTE also retains its patented dual layered-screen technology that enables users to switch between Smart Mode and Essential Mode, extending its battery life for up to 30 days.

Customers will be able to activate the 4G/LTE feature one month later, and until then can use all other features on the TicWatch Pro 4G/LTE on Wi-Fi and Bluetooth.

“The TicWatch Pro 4G/LTE has all the hallmarks of the original TicWatch Pro, including its trademark long battery life, but the Pro 4G combined with 4G/LTE connectivity and Mobvoi’s new TicPulse and TicMotion 2.0, truly takes advantage of Mobvoi’s artificial intelligence breakthroughs, while finally standing alone without an accompanying smartphone,” said Zhifei Li, CEO and Founder of Mobvoi. “We’re also excited to be one of the only 4G smartwatches running Wear OS by Google available in the United States starting today with Verizon.”

Enabled by number sharing, your phone number can be shared to your TicWatch Pro 4G/LTE to conduct VoLTE voice calls, send or receive SMS messages, and use your favorite messaging apps, all without tethering your smartwatch to a smartphone. More significantly, the TicWatch Pro 4G/LTE’s Cloud Synchronization enables wearers to seamlessly receive app notifications from their smartphone to their TicWatch Pro 4G/LTE  smartwatch - all without a tethered Bluetooth connection. In fact, the smartphone and smartwatch are synced directly through the cloud, so that users aren’t required to download a smartwatch app for the most popular messaging, social networking and email applications, including WhatsApp, Gmail, Google Hangouts, among others. So you can switch between using one or the other device without skipping a beat.

The TicWatch Pro 4G/LTE also introduces a brand new safety feature, called “SOS,” which can dial 911 and meanwhile broadcast your location to a 911 call center in the event of an emergency with a simple tap of a button.

Thanks to an improved heart rate monitoring sensor, TicPulse on the TicPro 4G/LTE offers 24/7 highly accurate monitoring of your health without the need for a smartphone, and also for the first time displays a comprehensive, real-time history of your heart’s health and steps taken on an hourly basis. In fact, on the TicWatch Pro 4G/LTE you can directly view your seven-day historical heart rate chart, which updates your data every day for a few minutes.

Qualcomm, Snapdragon and Snapdragon Wear are trademarks of Qualcomm Incorporated, registered in the United States and other countries.

Qualcomm Snapdragon Wear is a product of Qualcomm Technologies, Inc. and/or its subsidiaries.

Mobvoi formed strategic partnerships with Wear OS by Google in 2015 and with automobile giant Volkswagen in 2017. Mobvoi is dedicated to redefining the next generation of human-machine interaction by bringing hardware/software integrated products into people's daily life with a strong AI-centered approach.