More than anything else, the S Pen is what makes the Note a Note rather than a bigger Galaxy S. Samsung has made small tweaks to the design over the years, but the Note 9 introduced a big change in the form of Bluetooth. The Note 10 and Note 10+ evolves the S Pen even further with the addition gestures.

The new S Pen has Bluetooth like last year's stylus, so you can use the button to control apps on the phone. The stylus also has a 6-axis accelerometer and gyroscope. That means the stylus can tell which way it's facing like your phone can. Thus, you can swipe with the stylus to control the phone as well—Samsung calls this Air Actions.

In the camera app, you can swipe left and right to cycle through camera modes. Swiping up and down flips between the front and back cameras. If you want to change the zoom, you can draw clockwise and counter-clockwise circles. YouTube is the only other app with Air Actions at launch. While watching videos, you can swipe left and right to skip, and up/down to change the volume. Samsung says an SDK is now available for adding gestures to third-party apps. 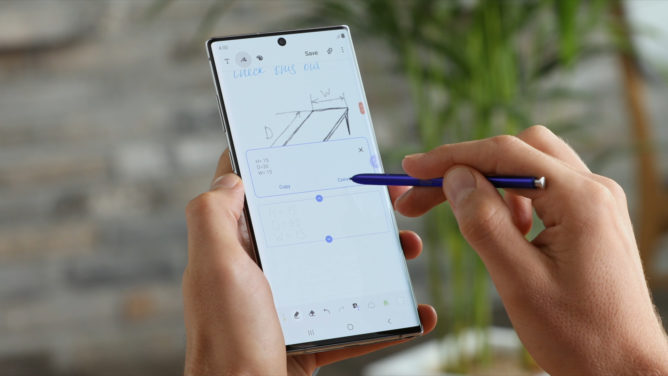 While this isn't directly part of the S Pen, Samsung has also added more options to its Notes app where you'll often use the S Pen. After taking notes, you can instantly convert them to PDF or Microsoft Word files.

As with last year, the S Pen's integrated capacitor charges rapidly when you drop it in the slot on the phone. The new S Pen also allegedly gets "hours" of battery life. Presumably, this is longer than the Note 9's stylus, but longevity depends on how many times you press the button and perform gestures.