Migrating accounts from Nest to Google

After a series of issues with hacked Nest accounts, Google announced users would be able to migrate their Nest accounts to Google accounts for the sake of better security. Now we're seeing this process coming to life in the Google Home app. A bunch of new text was added that gives the basic layout of the transition. As you can see above, there are also some cute animations of the Nest iconography transforming into the Google Home and Google account logos.

For some people, the move will be fairly straightforward, relying only on linking your Google account and tapping a few times to confirm the process. Things get more complicated if you have any products utilizing Works with Nest integration. As Google previously explained, the Works with Nest API will be deprecated and developers are being directed to the Works with Google Assistant API, so existing connections will have to be disabled to complete the migration.

Things also get more complicated for users when a Nest device is registered to somebody else's account. Evidently the devices, or accounts, will have to "unify" so you can continue using them. You'll be able to send instructions to them as part of the process.

If you're reading this, you've probably set up a default music streaming service for Google Assistant in the past. Whenever you ask for a song, it's this service that will be used automatically unless you specify a different one. This is also important if you need to manually associate an account with that service. While on-demand streaming was supported, live broadcasts are going to behave a little differently, and now it looks like Google is taking care of that.

A couple new lines indicate that Google Home will be adding a section for linking radio services to your account. Just like any other streaming service, this should make it possible to hear your favorite stations with a simple voice command.

There may be a new bottom bar in the works. A file for a new "simplified" version of the bottom bar has been added with the name simplified_bottom_bar_navigation_menu, which only differs from the original by the addition of the word "simplified" at the beginning. The contents of the file are also notably different, featuring the five buttons we can see below: Home, Discover, the microphone, Browse, and Account. 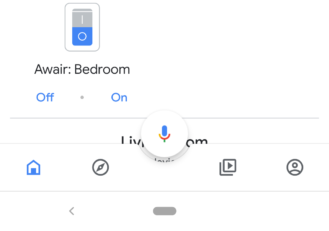 The new button nav bar appears to feature only three buttons: Home, microphone, and Browse. Evidently the Discover and Account tabs will be yanked and either placed elsewhere in the interface, or their content may simply merge into other places.

A future version will probably adopt the updated account switcher interface, just like the recent Google Voice update. As for the Discover tab, my guess is that its contents will be spread out between Home and Browse, or perhaps it will be going away entirely.

So far, there's no sign that this has gone live yet, and it appears other portions of the interface aren't finished yet, so we'll probably have to wait another version or two for this one to pop up.

With the Note10, Samsung says goodbye to more legacy features - and a smartphone philosophy