It's been a little over a year since Square Enix released Star Ocean: Anamnesis in the West, and it would appear that the collection-based RPG hasn't been doing that well. Early this morning, Square Enix announced on Twitter that it will shutter the game on November 5th. In-app purchases are already disabled, though the game will remain playable for free up until the announced shutdown date. 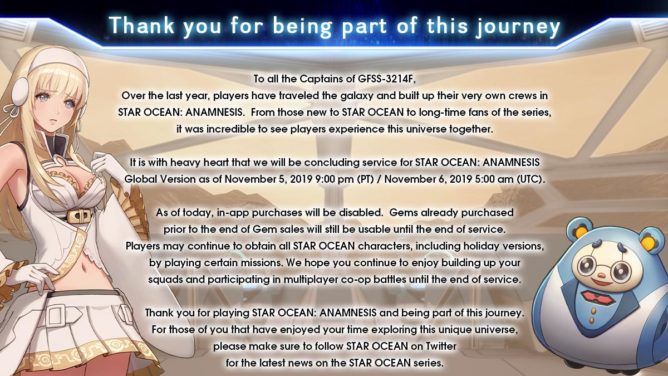 The above image details the closing date for Star Ocean: Anamnesis, the removal of the title's IAPs, and thanks fans for playing the game. While I would imagine this announcement may come as a surprise to some, it would appear that there are a few reviews on the Play Store that noticed Square's recent lack of interest in the game, so I suppose the warning signs were there if you were looking closely. Of course, those that sunk a lot of money into the title will lose access to all of their content once the game's servers are closed in November, but hey, doesn't it make you feel better knowing that Square thanked everyone while slinking away with all of your hard work.

I suppose it's the natural path for free-to-play games to disappear if they are not earning optimally for a developer, though the timeframe, in this case, is a little too short for comfort. This English version is barely a year old, and now that we know it will be removed soon, I have to question Square's commitment to the rest of its FTP catalog.