The messaging is pretty clear. New text in the APK's resources spell out the intent to "say goodbye" to Google Trips and references looking for the features in other Google products. By and large, this is a reference to the newly launched trip planning service at google.com/travel. Google Maps has also introduced a number of travel and discovery features and will likely take up any slack left behind by the web service.

The shutdown shouldn't come as much of a surprise given that Google effectively avoided mentioning the app in its announcement of the new website, which happens to resemble the app in many ways. Furthermore, the install count from the Play Store remains in the 5 million to 10 million bucket — which is very low compared to most other Google apps — and usage numbers even among remaining have been rumored to be quite low.

While a fully online website offers some advantages, it will likely create challenges for travelers that relied on a native app so they wouldn't have to use an always-on data connection.

No date is given for the shutdown, but Google will surely reveal more details once an official announcement is ready.

Well, the other shoe has dropped. Google has updated its support pages to say that the Trips mobile app will shut down on August 5, 2019. Until then, you can still access your trip data and notes in the app as usual. Most of the features from Trips are available in Search and Maps, but that won't be as convenient for people who really loved Trips.

Google Trips is dead now. Opening the app lands you on a "We've said goodbye to Google Trips" message that suggests you use Maps and Search instead. If you're adamant about using the app for a last-minute crack at those sweet discounts, you can change your phone's date back to August 4 and it should work still. Probably not for long, though. 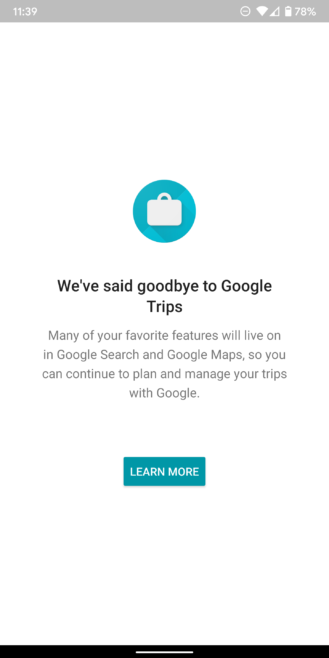