Smart home shoppers have dozens of options when it comes to internet-connected cameras, with solutions available from Nest, Arlo, Eufy, and more. Those run the gamut in terms of hardware features, cloud connectivity, and ultimate cost — initial and ongoing. Can the cheaper systems hold their own against the big boys? Today we're looking at one of the more affordable indoor/outdoor wireless cams, the new XT2 from Amazon-owned Blink.

The Blink system is designed to be modular, and consists of a number of individual Blink XT2 cameras and one sync module. The first thing you'll want to do is download the Blink app and create an account. Then you can plug in the sync module and start getting set up. 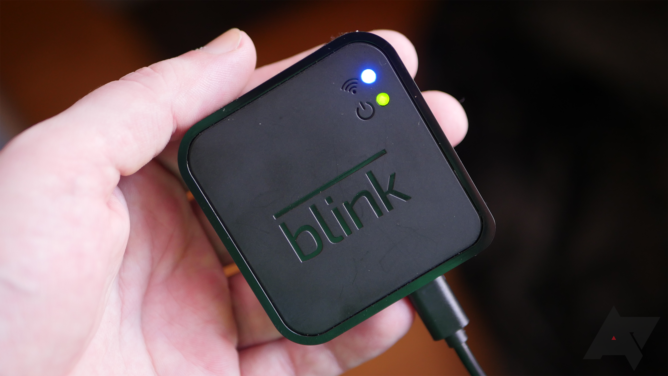 Blink's sync module serves as a relay for sending control commands to your XT2 cameras. If I've got one complaint it's that the module is extremely lightweight — and more than just feeling a little cheap, that's a problem when the weight of the power cable is enough to drag the module off a shelf.

Actually pairing the hardware is easy — starting with the sync module, you scan its serial number through the Blink app. Then it's time to move on to the cameras, which pair with an easy QR-code scan.

Getting set up in the Blink app.

The Blink XT2 cameras themselves are a bit odd looking: flat and square. On the face, you've got the 1080p camera up top, right above a big motion sensor. Down below there's a speaker grille for two-way audio chat. The back pops off to access the XT2's batteries, and each camera comes with a basic mounting kit: a tilt/pivot base, two screws, and an optional riser. 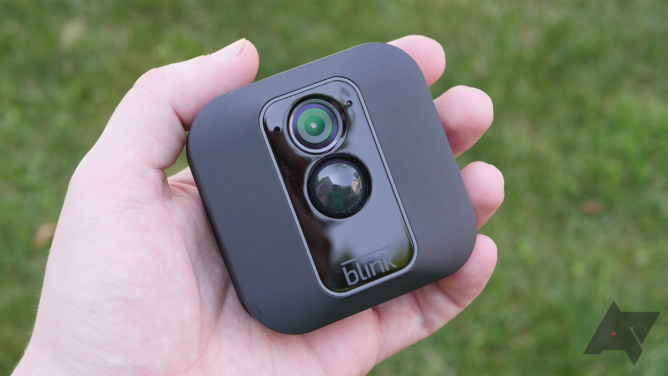 The first problem here is that the camera back is not fun to remove, an issue compounded by an unintuitive slide-and-pry mechanic, a mushy release button, and lack of tactile feedback along the way. A gasket all the way around confers IP65 weather resistance. 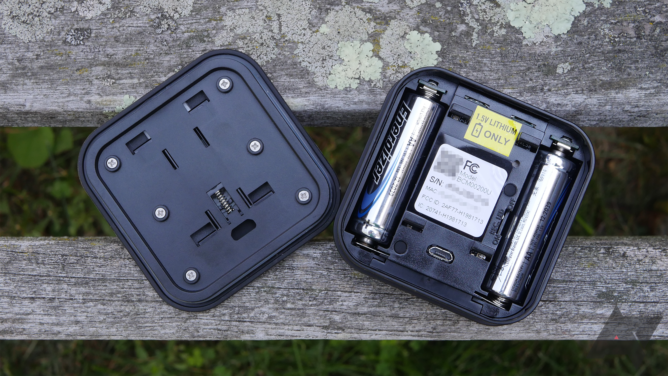 Yes, yes. Lithium ONLY. We hear you.

Blink includes two AA lithium batteries (that's disposable, not lithium-ion), which straddle the camera's guts. Make no mistake: these are the batteries you have to use, and Blink makes no small effort reminding you — no swapping them out for some convenient rechargeables, or even cheaper alkalines. 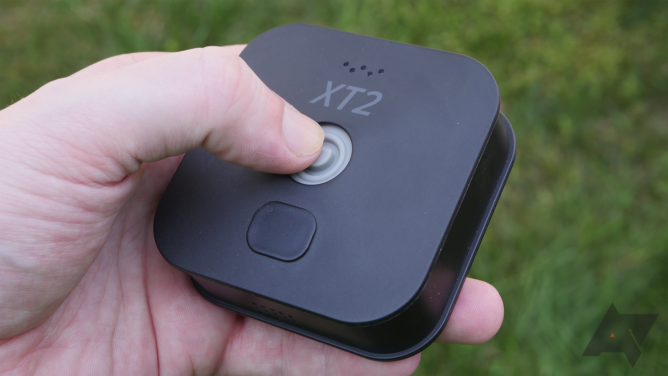 Push, slide, pry ... the XT2 battery door is less than friendly to open.

Setup is ultimately pretty painless. Beyond those battery-compartment struggles, the only problem I hit was when aiming a camera, its wide body would prohibit me from tilting it too far to the side in its base — the camera's edge hitting the wall behind it. Luckily, that's quickly solved by installing one of the included risers. 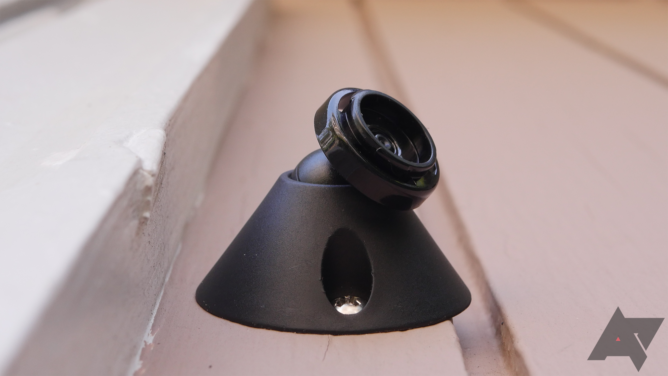 The XT2's ball-joint mount offers your choice of viewing angles.

The basic operation of the Blink system is simple. You can individually or collectively arm each camera, which will then record motion per your settings. You can schedule these active, “armed” periods to fall at set times throughout the day, or control them manually.

There's a general motion sensitivity slider for triggering recordings, but you can also specify “Activity Zones” for areas you explicitly want to ignore. Maybe there's a tree in your yard that keeps blowing in the breeze; with Activity Zones you can tell Blink to ignore the tree moving, but still record a video if someone walks through the gate next to it.

Options include adjusting the recording time, the “retrigger” time (how long the camera will wait before it's allowed to shoot a second video), the ability to stop recording early if motion stops, infrared settings, and video quality. And I've got problems with quite a few of these.

While there is that “stop early if motion stops” option, its logical counterpart is utterly absent — where the hell is “keep recording longer if motion continues?” Instead, periods of continuous motion are recorded as a collection of short clips, with pronounced gaps in-between. That may save on battery life, but it's lousy for security purposes.

The Blink XT2 is sold as a 1080p camera — an upgrade over the original XT's 720p. But if you use the app with its default options, you'll never see full-resolution video. Video settings offer “saver,” “best,” and “enhanced” modes. To get more info you have to turn to Blink's support site, where they're revealed to be stand-ins for 360p, 720p, and 1080p, respectively.

Defaulting a 1080p camera to 720p operation is lame. Calling that quality setting “best” is even lamer — I'm not getting into a pedantic diatribe right now, but even having an option better than "best" is illogical. I also don't love how the app tries to talk you out of using 1080p (or full IR illumination), warning about the negative impact on battery life. It's not great when your software discourages users from taking full advantage of your hardware. 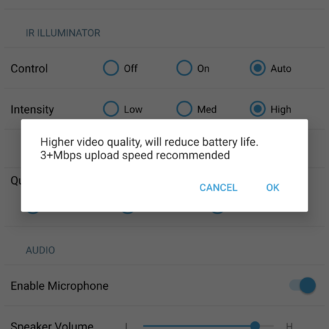 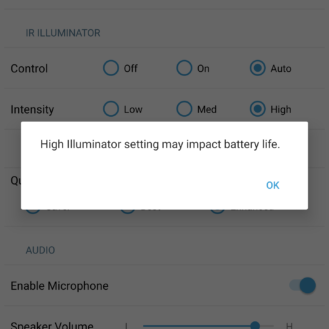 Once you've got motion and clip settings where you want them, Blink works pretty well. Comparing against an Arlo system, both picked up the same motion events, and while Arlo's better about capturing all of longer events, neither outright missed any that were desired.

Cloud storage is free, but works a little funny. Instead of being limited by file size or age, you're limited by total duration: you can save two hours of clips. What's a little weird — and yes, we verified this with Blink — is that quality doesn't matter at all, and you can save two hours of 360p videos just the same as two hours of 1080p. It's also odd this is expressed in terms of a percent-used bar; why not tell users “72 minutes remaining” instead of “storage 40% full?”

Blink's app offers basic integration with Alexa, supporting voice arm/disarm and viewing your camera feed on Echo and Fire devices. What you won't get are voice notifications of motion events.

Finally, let's talk batteries. When it comes to electronics, I despise the idea of consumables — I like to buy something once and be done with it. So the idea of building a camera that requires the use of disposable batteries, especially in a world with so many great rechargeable options, would not be my first plan. 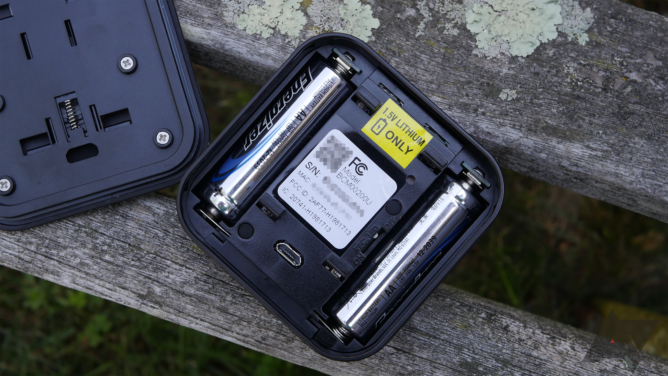 Theoretically the XT2 can enjoy battery life lasting multiple years. But will it? Not if you're using it in any appreciable way, as everything from setting the camera to its native resolution, to recording clips long enough to be useful, takes a toll on battery life — something the Blink app and support site reminds you at every turn.

I'd much rather have a full-featured camera I had to recharge every few weeks than one that's actively encouraging me to use less of it, just so I don't have to buy new batteries more often. It's worth noting that there is a flap covering a micro-USB port on the camera's rear you can use for wired power, but doing so compromises the XT2's waterproofing, limiting usefulness outdoors. 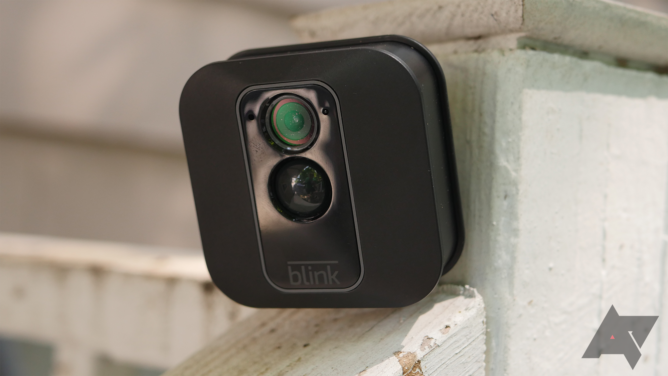 Maybe. The Blink XT2 strikes a nice balance between functionality and affordability, and the idea that you can set up a wireless outdoor camera with cloud storage for under $100 (with no ongoing service fees) is pretty great — and the value gets even better the more cameras you add.

But the XT2 is also rough around the edges. That shows in the hardware design, but also lots of other little signs that something's not quite right — issues like the XT2 being pulled from sale shortly after launch following reports of software glitches, or how the welcome email you get from Blink when registering an account is full of dead links.

While that hurts my confidence a little, there's also been a lot of work in improving XT2 functionality via software update since its release, and it's possible that some of my biggest complaints get addressed somewhere down the road.

Value is king, and none of the quirks I've described here really turn you off.

You need a really polished user experience, and have the money for a higher-end system.

[Update: Winners] Win one of 10 Origem HS-3 wireless earbuds (US)