After the 3a's release and with rumors around a fourth generation's announcement, the Pixel 3 hasn't been getting a lot of attention lately. However, it remains a more powerful device than its cheaper sibling, and thanks to a $300 price drop, both the Pixel 3 and 3 XL could worth considering, as they've just dropped to $500 and $600, respectively. 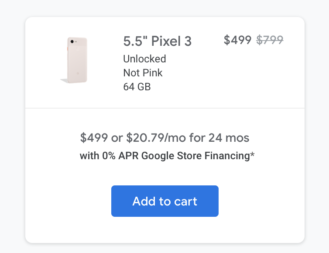 Even though they came out ten months ago, they're still very capable devices. If you're unfamiliar with the Pixel 3, it features a notch-free 5.5" 1080p OLED screen, a Snapdragon 845 processor, 4GB of RAM, 64GB of internal storage, IP68 water resistance, and wireless charging. Most importantly, the phone's highlights are its stock Android experience and 12MP camera with Night Sight. The 3 XL offers the exact same specs, but with a larger 6.3" notched screen.

If you need time to decide, there's no rush, as the $300 discount is valid until September and applies to all Pixel 3 and 3 XL phones, including the Not Pink and 128GB versions if you buy them through Google's Store. If you'd rather purchase your handset on Amazon, the same prices apply for the 64GB phones in black and white, but the pink and 128GB devices do not receive the same markdown. Lastly, if you're planning on activating your phone the same day you order it, you can even get an extra $100 off at Best Buy, but not all colors and options are available if you want an unlocked handset.