I don't live in the US, but even I know not to take the word "unlimited" in carriers' mobile plans literally. Verizon, specifically, has been one of the biggest aggressors to the word's definition, stretching its meaning over the years. Now, it's supposedly introducing four new unlimited plans, though nothing substantial is changing compared to the current ones and you're still going to be very limited to 720p streaming, even if you have the biggest plan with 75GB of 4G LTE data.

The new plans are dubbed Start Unlimited, Do More Unlimited, Play More Unlimited, and Get More Unlimited. The main benefit is that all of them are $5 cheaper per month compared to the current plans, regardless of the number of enrolled lines. There's also a new cheaper pricing when you have 5+ lines, while the older plans stopped the discounts at 4+ lines. 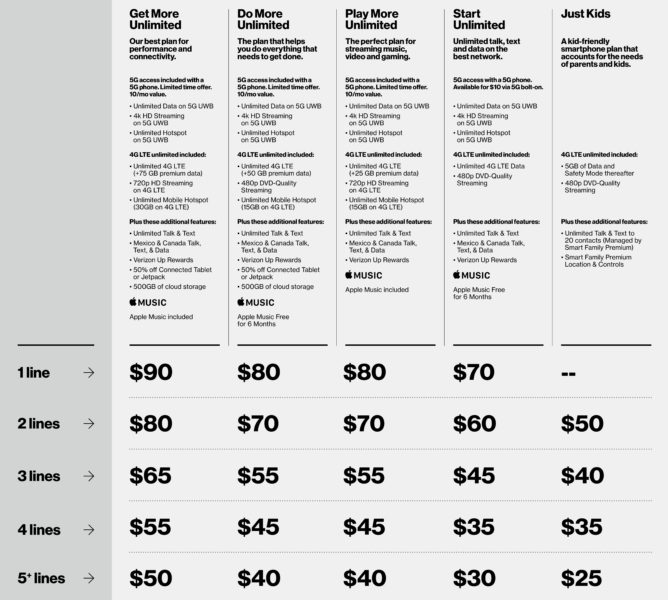 The top-tier plan, Get More, now has 30GB of hotspot use instead of 20GB on the current Above plan. The base Start plan, which replaces Go, still comes with little to no benefits — no premium LTE data (i.e. you can be kicked down to 3G or 2G on congested networks), no quick hotspot (600kbps max), and no free 5G access as offered to the other three plans.

The biggest confusion comes in the form of the new intermediate Do More and Play More, which replace the Beyond plan. The first gives you 50GB of premium 4G data but caps video streaming at 480p, the second lowers the 4G data cap to 25GB but ups video quality to 720p. The inverse relationship between data cap and streaming quality makes little to no sense.

Regardless of the plan, you'll still need to pay Verizon for the privilege of using your super premium 4G data for 1080p streaming. You also have a very nice 4G and hotspot limit set for your "unlimited" plan.