At launch, the Galaxy S10 series had something called "Bright Night," which was originally pegged to be a competitor to Google's Night Sight, but it didn't deliver on those hopes. Bright Night was just an automatic mode the camera would enter into via the existing Scene Optimizer to slightly improve extreme low-light results. Although it did use a similar feature to stack multiple exposures, it didn't have Google's AI chops or results. (You can read more about Bright Night over at SamMobile.)

The new dedicated "Night" camera mode allegedly does much better. 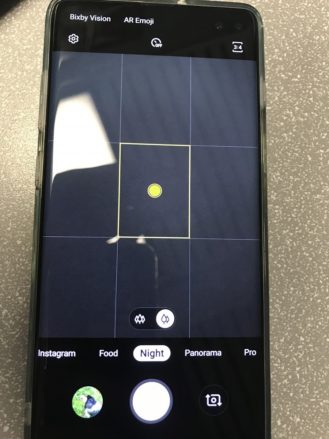 Photo showing the new "Night" mode on the S10+, Image via XDA and the SamCentral Discord server.

We haven't had a chance to play with the new Night feature ourselves — none of us at Android Police has either the AT&T, Verizon, or Exynos-powered versions of the phone, and expect a comparison to Google's Night Sight once we do have access — but examples provided at other venues show definite improvements:

This video compares the Exynos version's performance in and outside Night Mode, but results on the US Snapdragon models should be similar.

The update which delivers this new functionality (build G975USQU2ASF6) is exclusive to the AT&T and Verizon versions of the Galaxy S10+ for now. It also brings the phone up to the June security patch level and adds a new quick settings tile for a QR reader. The same June patch update for other carriers sadly doesn't appear to include the feature.

AT&T and Verizon's update should be rolling out as we speak to owners of that carrier's branded version of the Galaxy S10+. The impatient or intrepid can also try their hand sideloading the OTA file itself.

The Verizon version of the S10+ is also getting Night mode in this update according to some user reports. The build numbers were the same, but the changelog published by Verizon made no mention of the feature, so we weren't sure if it would also be receiving it. Our coverage has been updated to express that both carrier's phones will be getting Night mode.

The T-Mobile version of the S10+ is getting a different version for the June security patches, and we can verify that it is not present there.

The June security patch, which includes Night mode in the camera, is now rolling out to S10 and S10+ users on Sprint. Expect a ~500MB download.

The Note9 in the US is also getting its own taste of night mode. Previously available for some versions of the device available in other countries, we have a report of an update landing which delivers the feature on Verizon. The update, which is for build N960USQU2CSGA, also includes the July 1st security patch level.

Based on a claim at the Galaxy Note9 subreddit, T-Mobile version of the phone won't get night mode until next month. We have no word on the update landing for US unlocked devices or AT&T customers just yet, though.