Google Voice takes your phone subscription to the next level, thanks to advanced features such as voicemail transcription and web texting and calling. The service can also send you these transcripts by text or email, so you can read them even when you're out of data. Unfortunately, Google is removing the ability to receive these by SMS. Additionally, it's turning off the option to send SMS from its legacy web interface and Chrome Extension.

The first feature allowed users to receive a transcript of their voicemail directly by SMS when someone left them a message. Unfortunately, Google is killing that feature, claiming some messages are blocked by the carriers because they are automated. Although you'll still have the opportunity to get your transcripts by email or read them directly in the Google Voice app or web interface, you're losing the opportunity to access them when you're not connected to the Internet. You'll get to use this feature until next week, after which Google will phase it out. 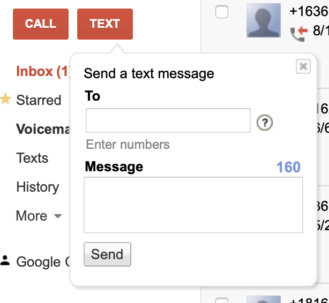 The second functionality that's going away could be less of a burden, as Google is removing the option to send SMS messages in Voice's legacy web interface (shown above). This makes sense, as it's natural for the company not to maintain two separate interfaces, and it claims this is a step towards phasing it out entirely. Unfortunately, though, Google is also killing the feature in the Chrome Extension, which means you'll have to open the web page every time you want to text someone. The company hasn't specified when the feature will be removed, and I could still send texts from the old interface this morning, but probably not for long.

Google turns EU antitrust ruling into profit: Search providers will pay to be featured as ...