Ever been at a local record shop or a charity store for some treasure hunting? You might find some obscure pieces of ephemera like no-name 70's cover discs or the odd Muppets comedy track or two. Well, we've got the digital equivalent of that today as Slickdeals has run up a list of hundreds of albums and songs that are free on Google Play Music right now.

Some of the showcase contains half-decent cuts from artists you know like Bon Jovi, Fergie, the Foo Fighters, Lucinda Williams (praise be), and Sugarland. There are the A- and B-sides of Jessica Simpson's 2010 Christmas album, "Happy Christmas," if you're into that thing. And then there's a Mark Ronson R&B production featuring Erykah Badu, Trombone Shorty, Mos Def, Zigaboo Modeliste, and members of The Dap Kings.

But among the hundreds of singles, EPs, and LPs you'll bump into, there will likely be few of them made by an artist you'd recognize. There are also some original soundtracks for a couple of odd movies and live, genre, and industry-annual compilations, too. Oh, and there's a single by the Bratz Rock Angelz... because why not? 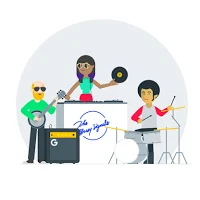 Google Hold Music Vol. 1 is free for the time being. It has eight tracks of very ploppy music that you'd considered to be "on image" for Google and, yet, you would definitely imagine compressed down to something you'd listen to while you're on the phone being held by Google for some reason. There's one token jazz instrumental here, if you look forward to jazz instrumentals at 8KHz sampling while cramping a receiver between your shoulder and ear. 3.5 stars out of 5, don't write to Pitchfork about it.

Take a look around the list on Slickdeals and be mindful that some of these freebies will have gone away — I really wanted to grab "Animal" by Miike Snow, but alas, it's back up to $1.29 —  by the time you get around to them. Still, it might be a nice way to spend the weekend, plugging in a few more tracks for that road trip playlist.

Anker's wireless charging stand drops to $13 on Amazon ($7 off)