A YouTube premium subscription comes with a bunch of perks, such as removing ads, playing videos in the background, and downloading content locally. Unfortunately, until now, offline download quality was limited to 720p, even when the actual video was available in a higher resolution. However, it seems YouTube is now raising that limit to Full HD quality, but only on iOS.

Back in February, we reported YouTube was preparing to raise the download quality limit to 1080p, but we haven't seen the feature become available since then. However, it seems Google is finally starting to roll it out to users, as the Full HD option appeared on an iPhone in India.

It's unclear whether the company is gradually deploying it to all subscribers, or whether it's decided to privilege iOS like it tends to do from time to time. None of us here can see the 1080p option on any Android device. We're also curious to see whether non-Premium users in countries where YouTube offers the feature for free will benefit from this higher quality, or if Google will save it for paid users.

We'll keep you posted once we learn more about Full HD downloads' global availability, but we also count on your feedback to let us know whether you're seeing it.

Two tipsters have spotted the feature live on their Android devices. Although we don't see it ourselves, it could be very early in the rollout or part of a server-side test. 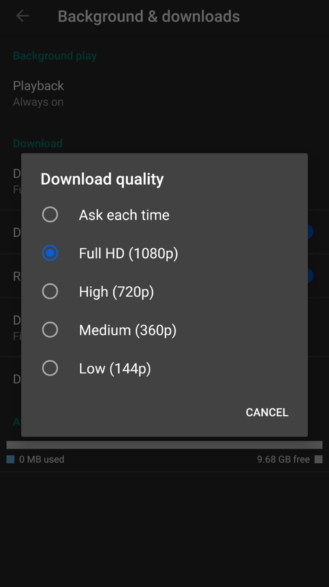 Left: 1080p download option in YouTube settings appearing on a Pixel 2 XL. Right: 1080p as an option when downloading a single video on a Note9.

While the feature may not be available for everyone (yet), at least Google doesn't seem to be intentionally holding the YouTube Android app back, as it has for some other apps when it comes to iOS and Android differences.

Xiaomi's stock has fallen almost 50% in the past year—is the smartphone boom over?

[Update: New test] Google could remove Voice Search from the Search widget, replace it with ...