At the end of its most recent day of trading, Xiaomi's stock was down to around $1.15 (USD) a share, just a hair above half of what it debuted on its first day on the market nearly a year ago. As a result, Xiaomi's total market capitalization is around $28 billion. Twitter's—still far from its historic peaks—is over $32 billion. While you'd be perfectly right to point out that market capitalization is a somewhat illusory measure of worth, it's also one of the few that so summarily and tidily offers an estimate as to what the market thinks a company is worth. And at this point, the measure for Xiaomi seems pretty concrete: the stock's price has steadily and consistently declined over the past year with very little fluctuation. That suggests most investors don't see a bright future for a company many thought was poised to take over the smartphone-as-a-commodity market. The question is why? 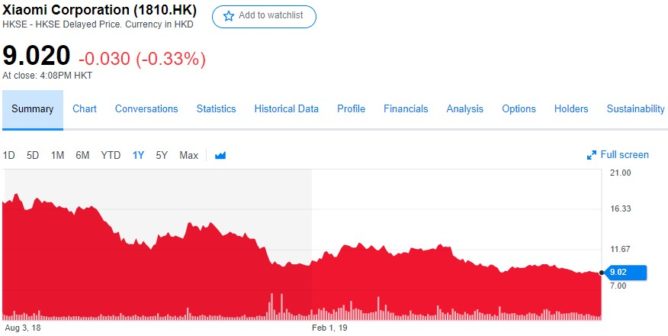 I won't claim to have all the answers, and when you're talking about a corporation that makes and sells products through hundreds of verticals in dozens of countries around the world which are then subject to their own micro and macroeconomic forces, things can get complicated quickly. Equally, to blame individual phone models or one particular decision by the company is unhelpful—knee-jerk stock movements perhaps can be attributed to such things, but not long-term trends. Looking at the basic financials, Xiaomi isn't doing terribly, either: the company has reaped a net profit for the last four consecutive quarters.

The competition didn't take long to figure out what Xiaomi was doing right—and copy it.

There's also the continued pressure Xiaomi has faced from competitors—some old, like Huawei and its Honor sub-brand—and some new, like Oppo's Realme, which seeks to directly undercut Xiaomi's Redmi line. This isn't to mention Vivo, Samsung, LG, and the various regional brands available in India and China, Xiaomi's largest markets. The competition didn't take long to figure out what Xiaomi was doing right—and copy it. And it turned out what Xiaomi was doing wasn't actually very special: building smartphones with good components and then pricing them to razor-thin margins.

It was hard to ever fully understand how Xiaomi would convert smartphone sales into a global branded retail empire.

Xiaomi has long placed its hat on the promise of the ecosystem, the notion that customers would buy products which bore the Mi logo, but often were produced in partnership with other companies who agreed to sell their products through Xiaomi's various web storefronts. The logic went that, by assuring consumers the products came at a good value and were certified to work with their smartphone, brand loyalty could be achieved. From rice cookers, TVs, vacuums, and smart projectors, to air fresheners (yes, really) and hand towels (again, yes, really), Xiaomi would have a Mi Ecosystem product to cover every base. But in a world where consumer information availability is at an all-time high, it was hard to ever fully understand how Xiaomi would convert smartphone sales into a global branded retail empire. I recall going to a briefing in which I asked the company to explain this model and how it would succeed globally, only to receive borderline nonsense in reply. And when it comes to the company's services, in a world full of highly competitive online and cloud options for consumers which are all accessible on Xiaomi's own phones, the same problem arises: why choose Xiaomi? I never got an answer.

This, I think, gets to the heart of the issue: Xiaomi isn't as special as all the hype it initially received suggested. Xiaomi makes a commodity—smartphones—and it makes them very well. And perhaps in China, its ecosystem of products and services are compelling and competitive enough to truly stand apart. But in the rest of the world, particularly the west, online retail, services, and consumer products at large are highly evolved industries. And with Xiaomi's core commodity facing a shrinking market, it seems less likely than ever that its repeated promises to come to America will be realized, even as it now attempts to move into Europe.

Xiaomi, then, may be priced by investors as what it increasingly seems to be: just another company building affordable smartphones.

Pixel phones gaining ability to talk to 911 operators, even when you're not able to