A good party should be an open party. Namely, it should have a few open things: an open door, an open bar (or two), and an open jukebox. That last bit can get more awkward than one would like as people fumble around with a computer or figure out how to connect their phones to the Wi-Fi network. Well, Spotify is cooking up a new feature that will let other users take control of a host's playlist with a simple scan of a code or tap of a link.

The Social Listening feature is still being tested internally, but was spoiled on Twitter by Jane Manchun Wong, someone who's unaffiliated with Spotify. She posted a number of screenshots.

The link to control my music will only work for those with access to Social Listening, meaning only Spotify employees for now

For those at Spotify, feel free to go wild :D

A new box should appear in the connected devices menu that allows a host to "connect with friends" either by having them scan a Spotify friend code — friends can find a "Scan Code" button in the same connected devices menu on their phones — or by sharing a URL to them. Friends' names will appear in the box as they connect. Anyone can choose to leave the group by tapping on the corresponding button. 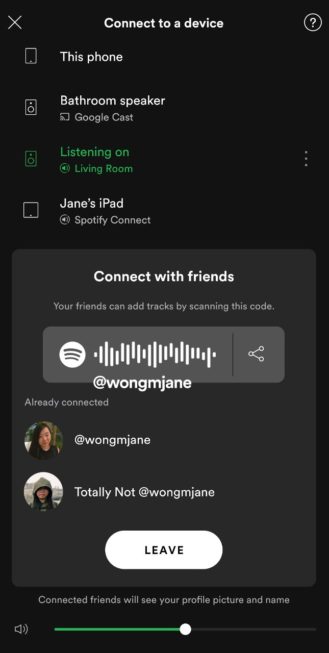 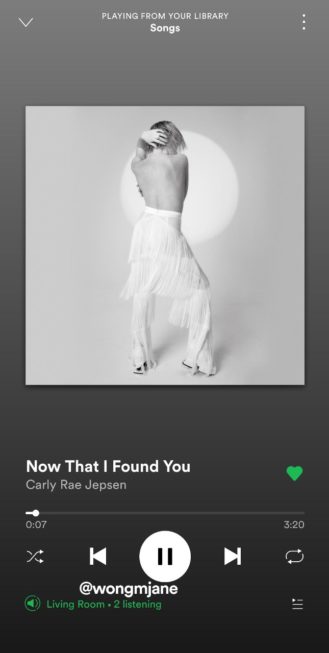 At the moment, we don't have an idea of what kind of control those friends would have over what's playing over the host's device. Do friends add tracks to a queue or can they have them played immediately? Can they skip a track or go back? How about toggling shuffle and repeat statuses? Answers may come in short order, depending on whether Social Listening goes public.

One of our tipsters spotted this feature in the wild. While attempting to connect to a speaker, the following slightly different prompt appeared: 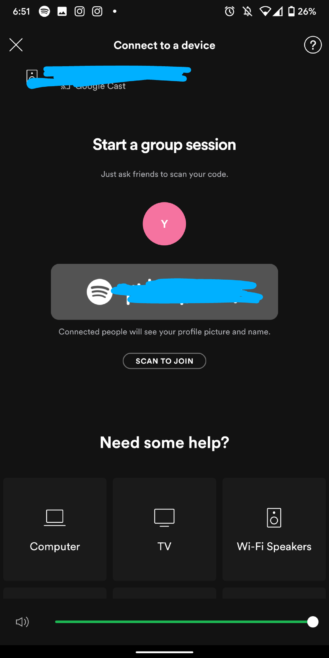 A new "group session" name seems to be attached to the feature. Before, it prompted you to "connect with friends." Behind that blue censoring above is the same Spotifyesque code, but the share button next to it is gone. A few other minor aesthetic differences are also present, like the loss of the gray background and the user icon appearing before others have connected. Spotify is either still testing different looks or something about the process Jane Wong spotted before is different than what our tipster is seeing.

This option appeared for our tipster while connecting to a Sonos speaker. So far, we haven't been able to reproduce it. Previously, the feature was limited to Spotify employees, and it isn't clear if this is the first part of a larger rollout or the result of an error.