Fitbit was huge in fitness trackers before the smartwatch fad, so it was a natural evolution for the company to add a few more features and launch a smartwatch. It started with the Ionic and then released the Versa, which was a better watch. Our friend Evan "evleaks" Blass has images of the upcoming Versa 2, and it has at least one major surprise: a real voice assistant.

The newly leaked device looks a good deal like the existing Versa but even more like the Apple Watch thanks to the 2.5D curved glass. There's also just one button this time instead of three. The image compilation posted by @evleaks even has enough resolution to zoom in on the back and check out the headlining features. That's how we know this watch will also have an OLED display instead of LCD like the Ionic and first-gen Versa. 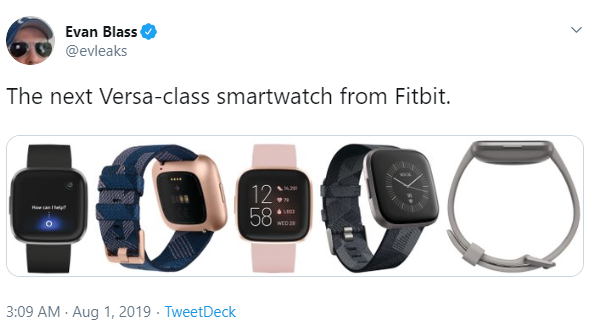 Fitbit's smartwatches have lacked voice assistant support, and thankfully, Fitbit isn't trying to develop its own. One of the leaked images shows an active Amazon Alexa prompt on the screen. That means there will be a microphone someplace on the watch, but that hasn't compromised its 50-meter water-resistance rating. If there are any other new features, we'll learn about them when the device launches. Fitbit will surely want to get the Versa 2 out before the holiday season, but anything else is pure speculation.

Breaker is beta testing its 'social' podcast app for Android, and here's what it looks like