Even though most TVs in our living rooms are becoming smart ones, we often connect them to third-party devices such as set-top boxes, sound systems, and DVD/Blu-Ray players. Using a separate remote control for each can be a pain, mainly because at least one of them is likely to vanish, but also because it's simply inconvenient to switch between several controllers. With the Harmony Smart Control kit, Logitech offers to group all these remotes into a single one, and even control your devices using your phone or smart speaker. Originally sold at $130, the product is now down to $50, which is quite an attractive discount.

The kit includes an all-in-one remote, as well as a hub and an extra IR extender. As it names suggests, the hub is actually the device that relays the IR signals to your devices, but you'll be able to use the included remote, your phone, or even your smart speaker with Alexa or Assistant to control it. 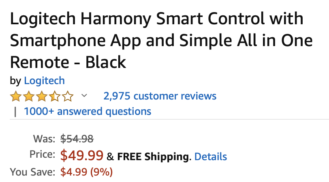 Even though the original MSRP was around $130, both Amazon and Best Buy have sold the Harmony Smart Control for much less recently. However, the product's price has dropped to $50 at both retailers, letting you save a little more on this bundle, which will surely come handy if you're tired of losing remotes every time you need them the most.