Huawei has just announced its revenue for the first half of 2019, the first time we've had numbers that demonstrate the impact its drama with the US government may have had on its bottom line. Depending on how you choose to look at them, the company has either successfully shrugged things off as it continues to grow, or sales have begun to stall. While the company is seeing a 23% year-over-year (and quarter-over-quarter) revenue increase, still an overall rise compared to last year, smartphone shipments are flat across Q1 and Q2.

Huawei's yearly reports may present detailed financial information in a nice series of tables, but the financial details it publishes for smaller periods are usually generalized, highlighting basic numbers and details that, taken in isolation, cast a positive light. Take this all with a grain of salt, but the company is definitely able to make it sound like it's doing pretty well, though it's painting an incomplete picture. Remember, Huawei only started having its "Entity List" trouble in May, and while that seems to have partly blown over, the full impact it made probably won't be felt until Q3/H2 2019.

Things like the number of contracts secured and commercial sectors serviced are merely misdirection, all we're really being given is net profit margin (8.7%) and sales revenue (CNY401.3 or $58.3 billion) for its three divisions. That's more than we got for H1 2018, but it's still an incomplete set of numbers for any real analysis.

Its carrier business (wireless and networking equipment for carriers, etc.) secured CNY146.5 billion ($21.28 billion) in revenue, and its enterprise business pulled in CNY31.6 billion ($4.59 billion). But, the elephant in the room is the consumer (read: smartphone) business, which secured CNY220.8 billion in revenue ($32.08 billion) with 118 million units shipped. Ostensibly, that's a good number, as it's presented as a 24% year-over-year increase, but averaging out these numbers over such a long period is a little misleading.

As Techcrunch notes, a 24% year-over-year rise is actually a turn for the worse considering just a few months before the company was reporting a 39% year-on-year rise for Q1. Q2's relative performance must have poor to pull the numbers down that far. The 118 million units shipped also sounds like a big number in isolation, but if the company shipped 59 million in the first quarter, that means it saw flat sales into the second quarter, which historically has better numbers than Q1.

In part, Huawei indirectly admits that the full image isn't presented by the few numbers supplied, making it clear that "revenue grew fast up through May," with less to brag about after, merely claiming that it contained to see growth at some level after it was added to the entity list. Huawei chairman Liang Hua admitted "that's not to say we don't have difficulties ahead. We do, and they may affect the pace of our growth in the short term." 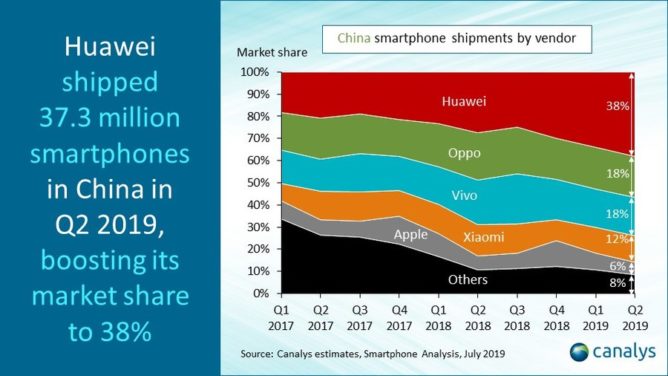 Sales shipments according to Canalys.

While analysts peg Huawei as securing 38% of sales in the Chinese market (though overall sales in the country continue to fall), Q2 has unarguably been a rough time overseas for Huawei, and the full impact may be greater come Q3. Huawei may not have suffered the full brunt of those earlier catastrophic predictions, and it has continued to grow overall, but things don't seem quite as good for the company as it would like them to sound.

Anker Soundcore Flare and Flare+ portable Bluetooth speakers down to $51 and $80, respectively ...

The new Android Auto officially starts rolling out today, and it's mostly an improvement