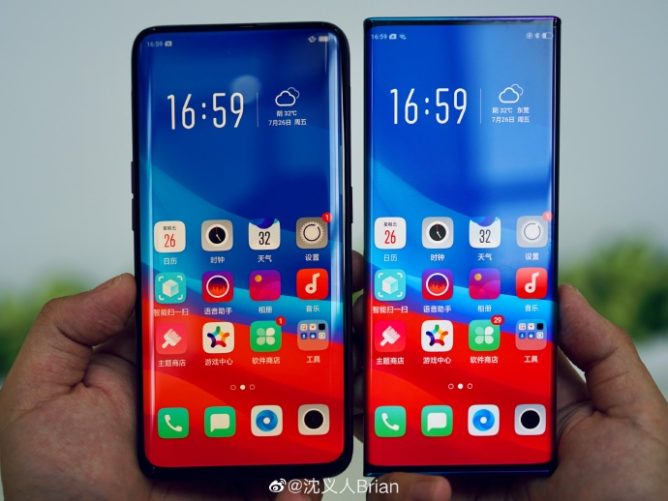 Some of the images compare what's presumably a testing device with the new display against the existing Oppo Find X, which features tapered slopes toward its sides. The waterfall display panel and cover glass are able to turn by about 90°, supposedly making the task of picking up the phone easier while granting more visual real estate and reduced bezels in a unique way — though we'd like to see how palm rejection will be implemented.

Video — originally shared on Miaopai, but since transferred to YouTube — shows the dramatic effect of the curve.

A similar display design is rumored to be in development at corporate cousin Vivo. One veteran Chinese tech blogger speculates that the main selling point for the design may be that it will allow for a display to cover more than 100% of the surface — a solid or cheap marketing point, depending on where you're coming from.

It appears as though Oppo is not using any translucent opulence to hide cameras behind the display, suggesting that a marketable phone with this waterfall panel may come with a selfie camera in an alternative position, say, a pop-up tab or a flip-around bar.

Fans and observers suspect that Oppo may use this display in a sequel to its Find X, perhaps as early as this half of the year.

OK, so we had these pics already from a verified Oppo-connected account on Chinese social media, but perhaps those words fill you with less than absolute certainty. Not quite sure what to think? Well, thankfully Oppo is stepping up and leaving nothing to chance as it confirms this news and re-shares the images of its waterfall display on Twitter.

Taking borderless smartphone innovation to new heights, we're thrilled to give you a first look at 'Waterfall Screen' technology. 🤯

What do you think the screen-to-body ratio is on this prototype? 😏 pic.twitter.com/99AQKh9ZgH