Google appears to be tired of the endless cycle of leaks and speculation when it comes to the Pixel 4. The company today has published a blog post and video showing off the upcoming phone's facial recognition tech, as well as gesture controls. We also get a tearaway view of the top of the Pixel 4 (pictured above) showing what that gap in previous leaks was for — a lot of things, it turns out.

Project Soli's radar-based motion sensors do make an appearance, with explicit gesture support for actions like skipping songs, snoozing alarms, and silencing phone calls — hopefully it works better than the hilariously bad implementation in the LG G8. Based on the video above, we might get some accompanying visuals with our gestures in the form of waves or pulses of light at the top of the display. It will also go by the name "Motion Sense" according to text included in Google's video, and it won't be available in all countries that get the phone. (Google may need individual government regulatory approval for Soli's radar tech.)

The facial recognition tech isn't radar-based, though (or, at least, it isn't solely radar-based). A "Dot Projector" paired with an infrared flood illuminator and IR camera fill out the sensors to the right of the earpiece — that last is supplemented by yet another IR camera on the left. Two IR cameras separated by a distance should allow for easy parallax-based depth information to be gathered. The system turns on thanks to Soli "as you reach for it" allowing it to unlock faster, "all in one motion" as Google claims. It will also work as a biometric authentication method with previously revealed APIs in Android Q for payments and apps. Google's method will also work "in almost any orientation—even if you're holding it upside down" which is more than we can say for some others.

Face data is only ever stored on-device in the Titan M security chip, according to Google. That means you don't need to be worried about it being stored by Google on your account or elsewhere online, where it could be subject to future hacks or leaks, making it more secure (even if biometrics should only ever be treated as usernames, not passwords, since they can't be changed). 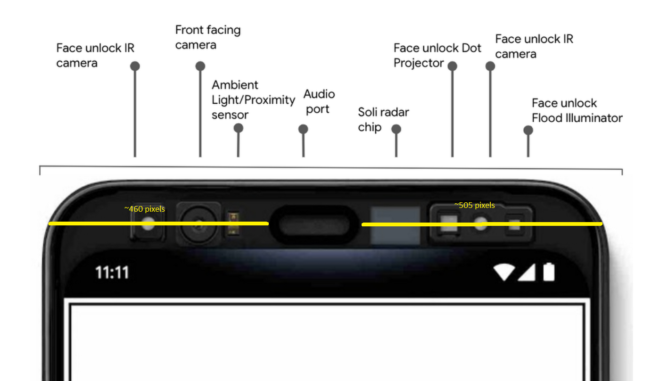 Curiously, the tearaway image that Google has published showing all these sensors has a distinctly off-center earpiece (or "audio port"). It's probably just the results of a hasty photoshop, since it would otherwise disagree with previous CAD-based renders and screen protector leaks, but it is curious.

The images published also show that the Pixel 4 only has one front-facing camera, rather than the two in the Pixel 3 and 3 XL. It isn't clear if that means we'll get just a wide-angle camera or a standard front-facer, but Google did publish a paper recently on correcting for distortion in faces on wide-angle photos, so it's possible (if still speculative) that we could see a wide-angle only front camera, paired with a software zoom — assuming Google still wants to offer the different levels of selfie "zoom" it provided with two cameras on the Pixel 3.

Google is seriously stepping up its game when it comes to openly revealing details surrounding its upcoming Pixel 4, and it's a refreshing change, if not an entirely new approach to PR when it comes to phones. While it's nice to speculate based on leaks, it's a lot nicer to actually know what we'll see this fall, and it could influence those on the fence for the upcoming Note10.