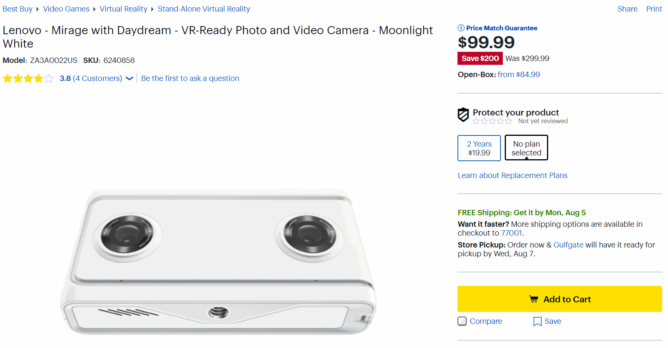 360° media content hasn't been the smash hit it was expected to be, partly due to how awkward panning around in all directions while watching VR media is. Google tried to make this process easier with the Lenovo Mirage Camera, which captures stereoscopic (3D) 180VR media that can be viewed on both a VR headset or a regular smartphone with just a few swipes. Part of the Daydream VR initiative, the camera aimed to simplify VR media capture and sharing — footage can be set to auto-upload to Google Photos or YouTube.

The Mirage Camera packs a Snapdragon 626 SoC with 2GB of RAM/16GB of storage (plus a microSD card slot). Media is captured with the dual 13MP f/2.1 cameras at resolutions up to 4K/30FPS, and the 2200mAh battery charges via USB-C. That's a lot of hardware for a hundred bucks.

You can buy the Mirage Camera from Best Buy or Amazon. To make things sweeter, Amazon lets you trade in old gaming hardware against your purchase. It offered me $93 for the ancient PS3, which seems like good buyback value. There was a lot of other random hardware Amazon seems to be accepting, like Nintendo Switch Joy-Cons, so you may want to play around with that.

Weekend poll: How many smart speakers do you have?