If you're looking for an affordable and reliable phone that offers an unaltered Android experience, the Moto Z3 Play is an option worth considering. The device was selling for $500 when it launched last year, which was quite expensive for a mid-range device. However, the handset is now a lot more interesting as its price has hit an all-time low of just $290.

The Z3 Play features a 6" HD screen, a Snapdragon 636 processor, 4GB of RAM, and 64 GB of internal storage, which is expandable thanks to the MicroSD slot. It also has a dual 12MP+5MP camera setup on the back and an 8MP selfie sensor on the front. Most importantly, the handset can be expanded with Moto Mods, letting you snap a gamepad, 360 camera, or additional battery on the back of your phone. The latter is actually included in the box and adds an extra 2200mAh to the main battery's capacity. 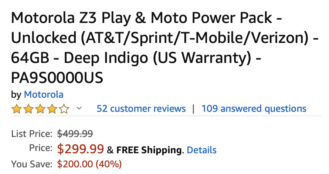 When we reviewed the phone, we found it decent but overpriced given its specs. However, the $210 discount definitely makes it more relevant, especially given it ships with the Moto Power Pack.

To pay as low as $290, you'll have to get the Prime Exclusive version, which comes pre-installed with Amazon apps and Alexa. Nevertheless, the standard edition is only $10 more both on Amazon and B&H, which is still a bargain if you'd rather avoid additional bloatware on your device. If you're interested in this deal, you better hurry, as the offer ends tomorrow at 11:59 PM EDT.