Wyze is on a mission to convert your house into a full-blown smart home, even if it has to do so piece by piece. The company started out selling very affordable surveillance cameras, which have only become more powerful as they pick up new functionality.

But the big move for Wyze happened just a couple months back, with the expansion beyond cameras into the security-focused Wyze Sense. Now we've got a smart scale and connected outlets just over the horizon, but today we're taking a look at Wyze's first foray into lighting, as we go hands-on with the recently released Wyze Bulb. 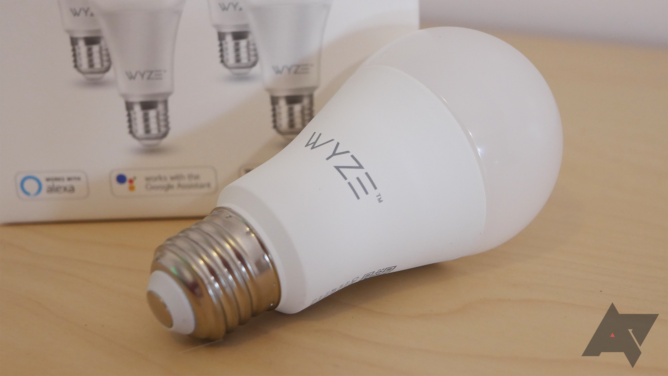 If I just told you “they're light bulbs,” would you stop reading here? Bulb-shaped, you screw them in — all this sound familiar? Really, though, that's not too far off from what we've got.

Wyze sells its new Bulb by the four-pack or as a single unit. The “A19” designation means it's your standard, round, bulb shape, while the “E26” refers to size of the socket — and again, this one's your standard “full size” lamp. Rated at 9.5 Watts and 800 lumens, this is a replacement for a 60W bulb, so pretty middle-of-the-road in terms of output: think more desk lamp than room-filler.

Given three hours a day average usage, Wyze estimates you'll see over 18 years of operation out of each Bulb. 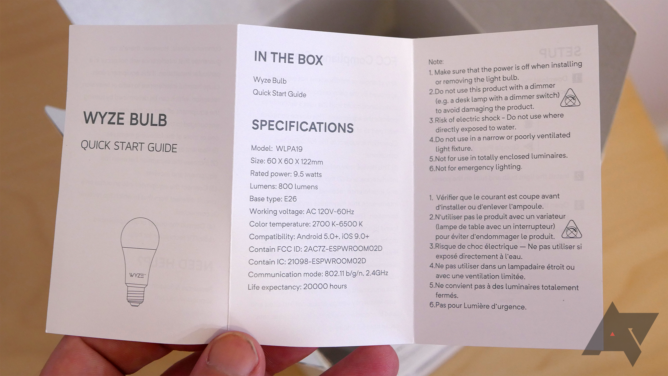 To get started, you simply unwrap a Bulb, screw it in, and switch it on three times in a row to start the pairing process — a sudden change in color temperature and a slow pulse let you know the Bulb's in the right mode.

The Wyze app walks you through all of this, and while the process is largely straightforward, it would be nice to have more information at times (get used to frequent “wait while something happens” pauses).

Communication occurs over Wi-Fi, and during the setup process you'll briefly connect to an AP generated by the Bulb itself. The only bit to be mindful of here is that Wyze requires the use of a 2.4GHz network, in case you favor 5GHz. If you run into unexpected hangs at this point, chances are your Wi-Fi configuration could be causing trouble. 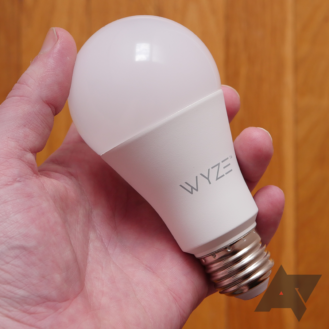 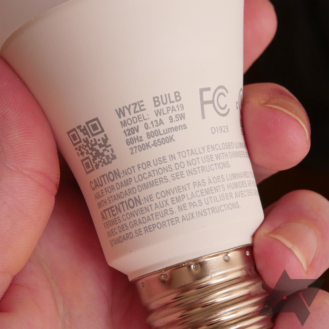 Once you get your bulbs paired, and assign them some names, they'll pop up in the Wyze app. Initially you'll see them from your main device view as individual Bulbs, all listed alongside your cameras. From there you can quickly toggle one on or off, as well as pop open a more detailed screen where you can adjust brightness levels and set color temperature. 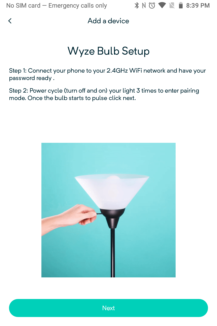 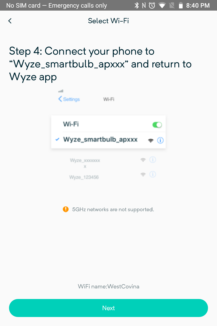 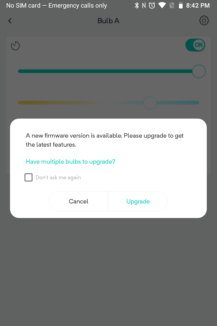 One very useful feature is the ability to pair Bulbs in a group. Grouped Bulbs can be adjusted as a single unit, so you won't be dealing with a bunch of mis-matched colors — one slider controls them all. And whether we're dealing with individual Bulbs or groups, you can set up “scenes” — essentially presets that quickly return them to a previous configuration.

Other capabilities include scheduling lights on a timer, setting up a vacation mode to simulate activity when you're away, and defining shortcuts that can perform complex series of actions across Wyze hardware — including adjusting your Bulbs.

All of that sounds OK, but there are a few issues with the implementation. The biggest is that the Wyze app often gets out of sync with the Bulbs themselves. There can be a slight lag before a Bulb responds to changes you make in the app, and make those changes too quickly, or maybe too many in rapid succession, and what you see in the app will no longer reflect what the Bulb is doing — maybe it's on when the app says its off, or is at the wrong brightness. Making further adjustments tends to correct the issue, but it happens very frequently and can be pretty frustrating. 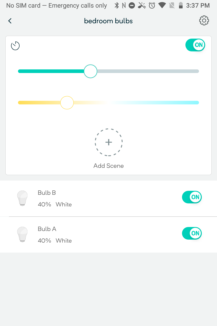 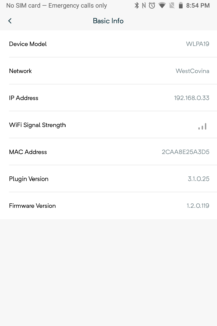 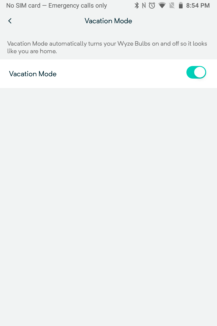 The software also makes it difficult to dial in a precise color temperature. The Bulb supports output ranging from 2700 to 6500 Kelvin, but the slider control never reports back anything more specific than soft white, white, daylight, and cool white. When you set the brightness, by contrast, you see a precise so-and-so-percent figure, but setting color temperature involves much more guesswork. While scenes do let you save settings — including color temperature — for later reuse, there's no obvious way to share them between Bulbs. So even if a scene does let you return to the color you want over and over, good luck getting the rest of your Bulbs to exactly match. 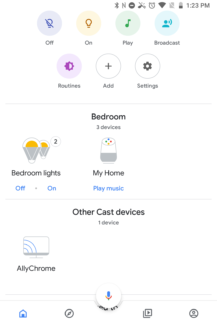 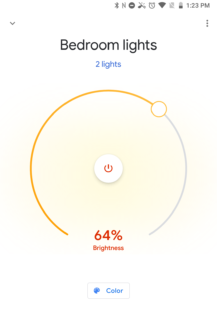 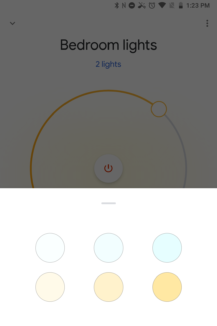 Probably the best part of the Wyze Bulb software is its support for external control, and particularly via the Google Assistant. Once your Bulbs are set up in Wyze, adding them to Home is a breeze (even if Wyze doesn't yet make how to do so abundantly clear in its documentation), and you'll soon find yourself controlling them with voice commands. Sadly, color temperature once again gets the short end of the stick, and although brightness controls work perfectly well here, voice doesn't seem to support color temperature at all, and in-app settings are limited to half-a-dozen presets — and not even all of those work as they should.

Honestly, though, if you're not always changing color temp (and who would) that's a minor issue — get the Bulbs set up in the first place, and you're in for a nice, long spell of incident-free operation. 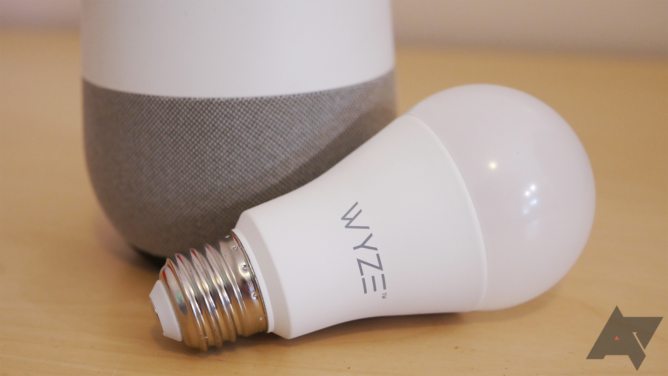 Yes. With Wyze smart-home gear, you know what you're going to get: crazy-low prices, decent functionality, and probably a little glitchy app behavior here and there. Know that going in, and you won't be disappointed. Here, at least, the glitches aren't deal-breakers, Home integration works well, and it's all just so affordable as to be pretty much an impulse buy.

You can easily pay $15 for a regular four-pack of LED lights of similar output to the Wyze Bulb, so $30 for smart-home connectivity — no hub required — is a cheap upgrade that delivers some valuable functionality. What Wyze is asking for four Bulbs is more akin to what other companies charge for mere two-packs. If you've never experimented with smart lighting before, this is a great point of entry, and if you've already got a system going, Wyze can offer a low-cost way to expand. 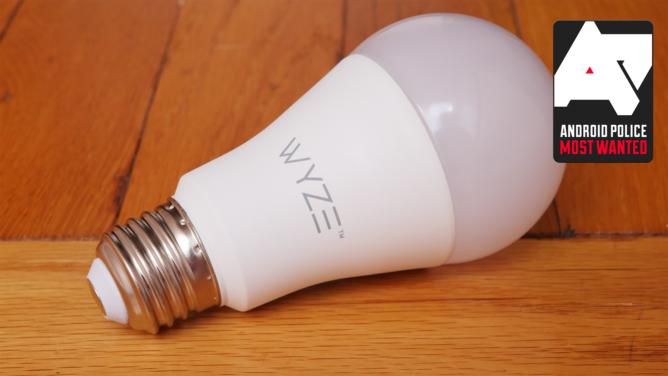 Moto E6 launches in the US and Canada, but struggles to justify the $50 price hike