Your parents probably told you that you should pay a lot of attention in math classes since you won't always carry a calculator with you. Yet here we, casually carrying devices in our pockets that are as good at solving equations as supercomputers were back in the 80s. Alongside using this computing power to send GIFs and watch YouTube, you can still solve mathematical statements with smartphones. With the latest Google Calculator update, decimals are also displayed as fractions. 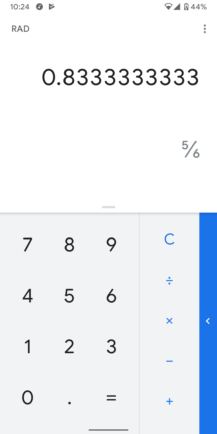 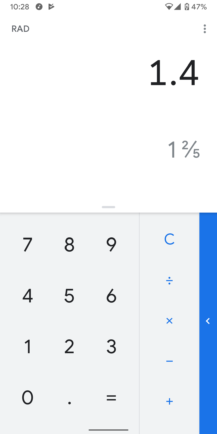 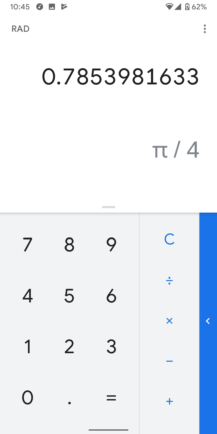 Some results are now easier to grasp.

The advantage of fractions cannot be disputed. Some numbers simply can't be elegantly displayed as decimals, just like the ⅚ in one of the screenshots above becoming a recurring 0.8333... While infinite numbers like π can't be expressed in fractions, Calculator can still use them in those. After all, π/4 is still neater than 0.7853981633. Calculator displays these new results without any additional work on your part — just punch in your equation, hit the "=" button, and you'll see the result in both decimal and fraction forms.

As pointed out by Rafael Freitas in the comments (thanks!), this update also gives us a small cosmetic change. The navigation bar is now transparent in preparation for Android Q's gestural navigation.

WHAT'S NEW
• Calculator now displays decimal results and symbolic results for fractions or certain advanced functions. For example, 10 ÷ 12 will display both 0.83333… and ⅚.

This is another thoughtful enhancement in the same way that the recently added dark mode was a welcome addition for many. Version 7.7 is currently rolling out via the Play Store. If the update is not yet available to you, download it from APK Mirror instead.

Google Fi is cracking down on data SIM hoarders, limiting each account to 4