According to Evan Blass (otherwise known as @evleaks), the Galaxy Note10 will indeed feature the Snapdragon 855+ SoC, just like the Asus ROG Phone 2 that was just announced. Some other specs that we've already heard about are also put forward by Blass, such as a 6.3-inch display on the regular Note10 and a massive 6.8-inch display on the Note10+. There are lots of pluses flying around here, it's hard to keep track. 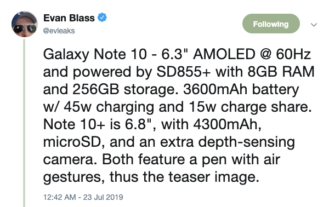 As we've also heard before, 45W fast charging is mentioned here, with 15W for the incredibly inefficient wireless power share feature. The smaller phone is said to have a 3,600mAh battery, while its bigger brother gets 4,300mAh and an additional depth-sensing camera. With all the leaked specs and images, there will likely be little to surprise us come August 7 when the phones are announced. Here's hoping for some unexpected excitement nonetheless.